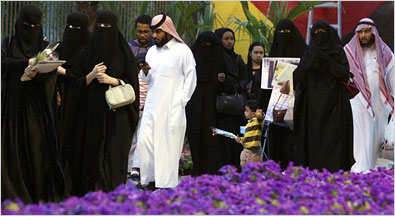 Saudi Arabia has been a central pillar of the Arab world for decades. Its vast oil supplies, close ties to the United States and cash-heavy diplomacy assured its position from the years of the Cold War until a wave of unrest broke in Tunisia in January 2011 and swept across the region. Now the Saudi ruling family is nervously reassessing a very different world.

With key allies like Egypt's long-ruling president Hosni Mubarak gone and the first flickers of public unrest appearing at home, Saudi Arabia has offered a mix of old and new responses. The oil-rich nation  has successfully stifled domestic protests with a combination of billions of dollars in new jobs programs and an overwhelming police presence.

But it has also taken unusually aggressive actions, including sending 2,000 troops into Bahrain, the tiny kingdom across a causeway from Saudi Arabia where protests by the Shiite minority have threatened the government.

The Saudis are worried that the turmoil in the region could present an opening to Iran, a Shiite country that has formed alliances across the region with groups opposed by Saudi Arabia, including Hezbollah and Hamas.

Saudi Arabia has also helped stabilize world energy prices by increasing its crude-oil production to make up for the loss of Libya’s oil.

The Americans fear that the unrest sweeping the Middle East is coming at a bad time for the Saudis, and their concerns have increased, partly because of the continued tumult in Bahrain. Many of the issues driving the protests elsewhere are similar to those in Riyadh: an autocratic ruling family resistant to sharing power, surrounded by countries in the midst of upheaval. At the same time, Saudi Arabia’s leadership is in question. King Abdullah, 87, is, by all accounts, quite ill, as is the crown prince.

The latest tensions between Washington and Riyadh began early in the crisis when King Abdullah told President Obama that it was vital for the United States to support Mr. Mubarak, even if he began shooting protesters. Mr. Obama ignored that counsel. “They’ve taken it personally,” said one senior American familiar with the conversations, “because they question what we’d do if they are next.”

Since then, the American message to the Saudis, the official said, is that “no one can be immune,” and that the glacial pace of reforms that Saudi Arabia has been engaged in since 2003 must speed up.

But the Saudi effort to defuse serious protests appears to take a different approach: a huge police presence, which smothered relatively small demonstrations; an appeal to the innate religious conservatism of the country; and an effort to throw more cash at Saudi citizens, who have become accustomed to the ultimate welfare state.

In March, Prince Nayef bin Abdel Aziz, the interior minister and No. 2 in the line of succession, publicly underscored the kingdom’s ban on demonstrations. The government called in top Saudi newspaper editors to dictate how to report on protests foreign and domestic. The country’s senior religious clerics condemned public protests for not conforming to Islamic law. These steps built on $36 billion in pay raises, housing support, unemployment benefits and other subsidies that King Abdullah promised to keep the peace.

Demonstrating to Iran that the Saudi-American alliance remains strong has emerged as a critical objective of the Obama administration. King Abdullah, who was widely quoted in the State Department cables released by WikiLeaks as warning that the United States had to “cut off the head of the snake” in Iran, has led the effort to contain Iran’s ambitions to become a major regional power. In the view of White House officials, any weakness or chaos inside Saudi Arabia would be exploited by Iran.