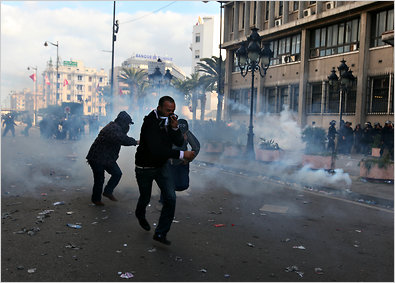 Until January 2011 Tunisia was known mostly as the most European country of North Africa, with a relatively large middle class, liberal social norms, broad gender equality and welcoming Mediterranean beaches. But now it has taken center stage as the launching pad of a wave of revolt that has swept through the Arab world and beyond.

For all its modern traits, Tunisia had one of the most repressive governments in a region full of police states, and levels of corruption among its elite that became intolerable once the economic malaise that has gripped southern Europe spread to the country.

In what became known as the Jasmine Revolution, a sudden and explosive wave of street protests ousted the authoritarian president, Zine el-Abidine Ben Ali, who had ruled with an iron hand for 23 years. On January 14, Mr. Ben Ali left the country, after trying unsuccessfully to placate the demonstrators with promises of elections. According to government figures issued later, 78 protesters died and 94 were injured during the demonstrations.

The prime minister, Mohamed Ghannouchi, created a government of unity, bringing in members of the official opposition, to serve as an interim government until elections could be held in mid-year. But turmoil continued, with new rounds of protests, streams of refugees leaving Tunisia for Europe or entering from Libya. On Feb. 27, Mr. Gannouchi resigned in response to complaints that he was too closely tied to Mr. Ben Ali.

Some protesters have called for the complete eradication of the old ruling party, while complaining that outlawed parties like the once powerful Islamist groups or the Tunisian Communists — battle-scarred stalwarts of the long dissident fight against Mr. Ben Ali’s 23-year-rule — were still barred from participating. That movement’s potential reincarnation is perhaps the most significant variable in Tunisia’s post-revolutionary future — yearned for by legions of working-class and rural Tunisians, viewed with just as much apprehension by the cosmopolitan coastal elite.

The revolution, as Tunisians call it, also has created a power vacuum, and Tunisia faces enormous challenges in rebuilding its political system. The country’s caretaker government has been confronted with nearly daily protests by a variety of groups, the police force has been badly weakened by mass desertions and the firing of top officials, and provincial government offices remain dysfunctional. The judicial system is hobbled by its links to the ousted regime.

The head of a Tunisian government commission on political reform warned on Feb. 22 that the country risked falling into “anarchy” as it passed through what he described as a very dangerous postrevolutionary transition toward multiparty democracy.

Birth of a Movement

The Tunisian revolution began in December 2010, after a college-educated street vendor burned himself to death in protest of his dismal prospects amid Tunisia’s poverty. A wave of violent demonstrations spread, of the kind not seen since Mr. Ben Ali came to power 23 years ago in a bloodless coup. Dozens died as security forces fired on protesters.

The protesters came together after circulating calls to rally over social networks like Facebook and Twitter. Many were unemployed college graduates, and they angrily demanded more jobs and denounced what they called the self-enrichment of Tunisia’s ruling family.

It is not religion, nor the adventures of a single leader, nor wars with Israel that have energized Tunisia, the subsequent uprising in Egypt and elsewhere in the region. Across the Middle East, a somewhat nostalgic notion of a common Arab identity, intersecting with a visceral sense of what amounts to a decent life, is driving protests that have bound the region in a sense of a shared destiny.

A remarkable two-year collaboration gave birth to a new force in the Arab world — a pan-Arab youth movement dedicated to spreading democracy in a region without it. Young Egyptian and Tunisian activists brainstormed on the use of technology to evade surveillance, commiserated about torture and traded practical tips on how to stand up to rubber bullets and organize barricades.

They fused their secular expertise in social networks with a discipline culled from religious movements and combined the energy of soccer fans with the sophistication of surgeons. Breaking free from older veterans of the Arab political opposition, they relied on tactics of nonviolent resistance channeled from an American scholar through a Serbian youth brigade — but also on marketing tactics borrowed from Silicon Valley.

Protesters seemed to direct much of their anger at the great wealth and lavish life of President Ben Ali’s second wife, Leila Trabelsi, a former hairdresser, and their extended family, most notably their son-in-law, the billionaire businessman Mohamed Sakher El Materi.

A gracious dinner at Mr. Materi’s home was detailed in a cable from the American ambassador to Tunisia that was released by the anti-secrecy organization WikiLeaks and fueled at least some of the outrage: a beachfront compound decorated with Roman artifacts; ice cream and frozen yogurt flown from St. Tropez, France; a Bangladeshi butler and South African nanny; and a pet tiger in a cage.

State television reported the arrests for “crimes against Tunisia” of 33 members of Mr. Ben Ali’s family. The government also said its prosecutors had opened an investigation into the family’s overseas assets, while the Swiss government moved to freeze their assets in Swiss banks.

On Feb. 22, 2011, the head of a Tunisian government commission, which is tasked with dismantling the repressive laws of the Ben Ali government, warned that the country faced a dangerous transition as it struggled toward multiparty democracy.

Yadh Ben Achour, a prominent lawyer who is the head of the country's Higher Political Reform Commission, said Tunisia would miss the two-month deadline stipulated in its Constitution for a presidential election to replace Mr. Ben Ali. It would be impossible to organize elections before the March 15 deadline, he said.

Tunisians cannot agree whether to change the current Constitution or discard it and elect a constitutional assembly that would write a new one, he said. The commission may also help draft a new constitution, a process, he said, that risked being bogged down by politicians focusing on narrow interests and not the future of the country