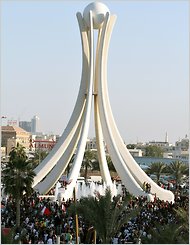 Bahrain is a small desert kingdom in the Persian Gulf, a nation of about 1 million. In February 2011, it became swept up in the unrest sweeping through the Arab world, as long simmering tensions within the country boiled over, producing large demonstrations and a violent crackdown. For the Obama administration, Bahrain is the Egypt scenario in miniature, a struggle to avert broader instability and protect its interests while voicing support for the democratic aspiration of the protesters. It is one of the most politically volatile countries in the Gulf, and one of the most strategically important for the United States, which bases its Fifth Fleet there. It produces a notable amount of oil, and is a banking hub.

March 18 The Bahraini government tore down the protest movement’s defining monument, the pearl at the center of Pearl Square, a symbolic strike that carried a sense of finality. The official news agency described the razing as a facelift.

March 17 The Bahraini government, which sought in February to mollify protesters clamoring for democratic reform, decisively shifted tactics to forceful repression. A day after aggressively clearing Pearl Square of protesters, authorities arrested several major opposition figures, including Hassan Mushaima, a Shiite and Islamist dissident politician. State television said the leaders were arrested for having “communicated with foreign countries” and because they “incited killing of citizens and destruction of public and private property.”

March 16 Two days after the king of Bahrain brought in 2,000 troops from Saudi Arabia and other neighboring allies, and the day after he declared martial law, his security forces rolled into Pearl Square, the stronghold of the antigovernment protest movement, taking it from the protesters who had moved in a month ago. Plumes of black smoke choked the central city landscape as troops repeatedly fired tear gas canisters, rubber bullets and what sounded like live ammunition, igniting fires in tents, trees and brush. Most of the hundreds in the square fled from the huge display of military might. There was no immediate word on casualties.

March 15 Hours after the king of  Bahrain declared a three-month state of emergency, doctors said two protesters had been killed and some 200 wounded and injured in clashes with riot police in the suburban village of Sitra, a stronghold of antigovernment activists six miles south of the capital. The violence contrasted starkly with a large protest in downtown Manama, where more than 10,000 protesters marched peacefully on the Saudi Arabian Embassy to denounce a military intervention by Persian Gulf countries the day before.

March 14 Troops crossed from Saudi Arabia into Bahrain to help quell unrest there, a move Bahraini opposition groups denounced as an “occupation,” while pro-government legislators called for the imposition of martial law. The Iranian government, which has supported the protests led by the Shiite majority, branded the move “unacceptable.”

March 13 Thousands of antigovernment protesters in Bahrain blocked access to the financial district in Manama, the capital, preventing workers from getting to their offices and pushing back police officers who tried to disperse them. It was the most serious challenge to the royal family that rules Bahrain since protests began last month. Witnesses said the police used tear gas and fired on the protesters with rubber bullets.

March 12 Defense Secretary Robert M. Gates warned this tiny kingdom’s ruling family that “baby steps” toward reform would not be enough to meet the political and economic grievances sweeping the region. Mr. Gates also cautioned Bahrain’s king and crown prince during two hours of meetings in Manama, Bahrain’s capital, that if the reform process was prolonged, the United States feared that Iran would become involved and create more chaos.

March 6 The leaders of Bahrain's opposition movement said that they would not be mollified by offers of money and jobs, raising the prospect of a protracted standoff between protesters and the embattled government of this strategically important Persian Gulf island nation.

March 4 Thousands of Shiite protesters converged on the state television headquarters outside the capital, Manama, The Associated Press reported. The latest protest came a day after brief clashes between groups of Sunnis and Shiites in the town of Hamad that again highlighted the sectarian divisions that have been driving demonstrations in the tiny Persian Gulf nation.

Feb. 27 The leader of a banned opposition party, Hassan Mushaima, returned from exile and exhorted a crowd of tens of thousands of antigovernment protesters to continue demonstrating until they achieved a “successful revolution.” Mr. Mushaima, a dissident who has long demanded fundamental changes in what is effectively an absolute monarchy, appeared to be trying to move into a leadership role in the opposition movement.

Feb. 25 Pro-democracy demonstrations on a scale that appeared to dwarf the largest ever seen in the tiny Persian Gulf nation blocked miles of downtown roads and highways in Manama, overflowing from Pearl Square for the second time in a week. For the first time however, it was the country’s Shiite religious leaders, rather than the political opposition, who called for people to take to the streets. Although some of the chants and symbols had a religious cast, protesters’ demands remained the same, emphasizing a nonsectarian call for democracy and the downfall of the government.

Feb. 22 More than a hundred thousand protesters poured into Pearl Square in an unbroken stream stretching back for miles along a central highway in the biggest antigovernment demonstration yet seen in this tiny Persian Gulf kingdom. Security forces were nowhere to be seen along the demonstration route. The protesters streaming into the square on Tuesday joined thousands of others who have camped out in order to occupy the area after the military pulled out following a deadly crackdown last week. The sheer size of the gathering was astonishing, and the new arrivals were likely to overflow into the area surrounding the square.

Feb. 21 The organizers of the Bahrain Grand Prix announced that the Formula One race which was scheduled to run March 13 at the Sakhir circuit, outside the capital, Manama, had been canceled because of the political unrest in the country. Bahrain has held the race since 2004 at a purpose-built circuit about 50 kilometers, or 30 miles, from the capital city. But the majority of the teams, media and foreign spectators stay in hotels in the center of the city, many of them near Pearl Square, which has been the central meeting point of the demonstrations.

Feb. 20 Teachers, lawyers and engineers again marched into Pearl Square, joining an emboldened opposition whose political leaders demanded that King Hamad Bin Isa al-Khalifa dissolve the government and fire his uncle, who has held the post of prime minister for 40 years, before they agree to enter into talks. The crown prince, Salman bin Hamad al-Khalifa, continued to call for a national dialogue and period of mourning as a step toward reconciliation. But officials with the leading opposition party said that with six people dead, hundreds injured and many still missing, the king would first have to convince them that he was willing to compromise after repeatedly unleashing his security forces on civilians.

Feb. 19 Thousands of jubilant protesters surged back into Pearl Square, the symbolic heart of Bahrain, after the government withdrew its security forces, calling for calm after days of violent crackdowns. The shift was at least a temporary victory for the Shiite protesters, who had rejected a call to negotiate from Bahrain’s Sunni monarch until the authorities pulled the military off the streets. A review of administration statements shows that American officials overlooked recent complaints about human rights abuses in the strategically important kingdom.

Feb. 18 Government forces opened fire on hundreds of mourners marching toward Pearl Square. A Western official quoted a witness as saying that the shooters were from the military, not the police, indicating a hardening of the government’s stance against those trying to stage a popular revolt. Video: Bahrain: A Diplomatic Puzzle

Feb. 17 Hundreds of heavily armed riot police officers rushed into Pearl Square, firing shotguns, tear gas and concussion grenades at the thousands of demonstrators who were sleeping there. At least five people died, and at least 200 were wounded, according to medical personnel. At the main hospital following the violence, thousands gathered screaming, crying and collapsing in grief.

Feb. 16 Thousands of protesters poured into this nation’s symbolic center, Pearl Square, in a raucous rally mirroring the unrest convulsing, if not transforming, governments of the Middle East. The crowd grew bolder as it grew larger, and modest concessions from the government seemed only to raise expectations among the protesters.

Though the al-Khalifa family has ruled since the 18th century, Bahrain has been a politically troubled nation for generations.

The kingdom gained independence from Britain in 1971. Soon after, the price of oil spiked during the Arab-Israeli war of 1973. Bahrain's oil reserves were small compared to its neighbors', but provided fuel for rapid development.

For a period, the island kingdom was hailed as a model of reform in the Arab world. King Hamad ended a 25-year state of emergency in 1999 and promised to turn Bahrain into a constitutional monarchy with a newly elected Parliament.

But in 2001, he reneged on his promise and imposed a constitution establishing a second, appointed legislative house that significantly curtailed the power of the elected one. Gerrymandering ensured a Sunni advantage in the elected house, too, prompting the predominantly Shiite opposition to boycott elections in 2002.

In the years since, Bahrain's Shiites have been marginalized. They allege that the government has backed Sunni Islamists and encouraged increasingly sectarian politics. Activists in the country say they have uncovered a systematic effort to naturalize Sunnis from other Arab countries as well as from Southeast Asia.

Shiites are all but banned from the military and security forces — certainly from command positions — one of their primary grievances. The police force is staffed primarily by foreigners: Syrians, Iraqis, Jordanians, almost anyone who happens to be a Sunni and is eager to earn a Bahraini passport.

There has long been tension between the Sunni Muslim king, Hamad Bin Isa al-Khalifa, the royal family and ruling elites, and the approximately 70 percent of the local population that is Shiite. About half the residents of Bahrain are foreign workers.

Since late 2009, Shiites in villages around the nation have been holding regular protests, burning tires in the road and demanding the release of dozens of political prisoners.

In February 2011, skirmishes broke out between young protesters and heavily armed government forces in villages around Manama, the capital. The clashes appeared to have rattled the leadership into trying both enticement and fear. King Hamad announced that the state was giving every Bahraini family the equivalent of $2,700 in cash, and he filled the streets with heavily armed riot police.

Tens of thousands of demonstrators filled Pearl Square in Manama, camping out in an almost carnival-like atmosphere and calling on the king for reforms.

The pro-democracy protests in this island nation have followed the pattern of those in Egypt and Tunisia, with cellphones and Facebook posts propelling the movement and a botched, deadly crackdown by security forces serving to embolden the demonstrators.

Yet those who lead and take part in the nearly daily demonstrations say they fear at least one key difference: The United States may not be fully on their side.

Unlike in the case of Egypt, where President Obama promised to “stand up for democracy” and called for a change of power “now,” Washington has backed the royal family in Bahrain with statements supporting the country’s still-undefined proposal for dialogue with the opposition.

Obama administration officials say they believe the royal family has earned the right to try to navigate this period, after heeding the United States’s plea to call off the security forces who shot the protesters, killing seven of them.