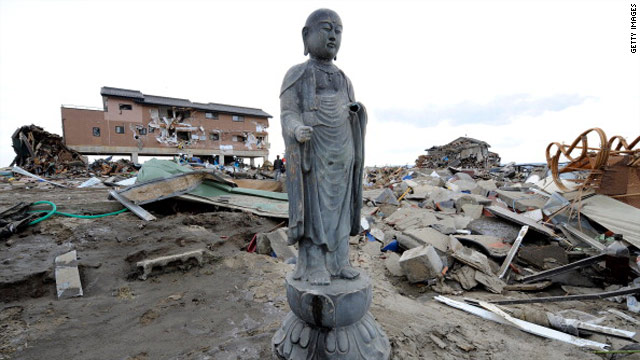 <A religious statue in a tsunami-devastated area in Natori city, along the coast.>
March 14th, 2011

Proud of their secular society, most Japanese aren't religious in the way Americans are: They tend not to identify with a single tradition nor study religious texts.

When there is a funeral, though, Japanese religious engagement tends to be pretty intense.

“A very large number of Japanese people believe that what they do for their ancestors after death matters, which might not be what we expect from a secular society,” says Bocking. “There’s widespread belief in the presence of ancestors’ spirits.”

In the days and weeks ahead, huge numbers of Japanese will be turning to their country’s religious traditions as they mourn the thousands of dead and try to muster the strength and resources to rebuild amid the massive destruction wrought by last Friday's 9.0 magnitude earthquake and resulting tsunami.

For most Japanese, religion is more complex than adhering to the country’s ancient Buddhist tradition. They blend Buddhist beliefs and customs with the country’s Shinto tradition, which dates back to the 15th century.

“Japanese are not religious in the way that people in North America are religious,” says John Nelson, chair of theology and religious studies at the University of San Francisco. “They’ll move back and forth between two or more religious traditions, seeing them as tools that are appropriate for certain situations.”

“For things connected to life-affirming events, they’ll turn to Shinto-style rituals or understandings,” Nelson says. “But in connection to tragedy or suffering, it’s Buddhism.”

There are many schools of Japanese Buddhism, each with its own teachings about suffering and what happens after death.

“There are many Buddhist explanations of why calamities happen: from collective karma to seeing calamities as signs of apocalypse,” says Jimmy Yu, an assistant professor of Buddhism and Chinese religions at Florida State University. “And perhaps all of them are irrelevant to what needs to be done.”

Indeed, where Christianity, Judaism or Islam are often preoccupied with causes of disaster - the questions of why God would allow an earthquake, for example - Eastern traditions like Buddhism and Shinto focus on behavior in reaction to tragedy.

Japan’s major religious groups are still developing responses to the disaster, but experts say the impulse toward maintaining a positive outlook will likely translate into calls for Japanese to help friends and neighbors clean up and rebuild.

At the same time, Japan’s Buddhist priests will be preoccupied with rituals surrounding death and burial. Japanese Buddhism is often called funeral Buddhism because of its concern with such rituals.

Despite the Japanese penchant for blending their religious traditions - even with Western traditions like Catholicism - the overwhelming majority are buried according to Buddhist custom: cremation and interment in a family plot.

With many bodies swept away in the tsunami, many Japanese will have to come to terms with having to forego that ritual.

After burial, Japanese typically continue to practice rituals around caring for the spirits of the deceased. Most Japanese keep Buddhist altars in their homes, Nelson says, using them to pay tribute to dead ancestors.

“In the days ahead, you’ll see people praying, with hands folded, for the spirits of those killed,” he says. “It goes back to a really early understanding of human spirits and rituals designed to control those spirits, which can take 49 days or, depending on the type of Buddhism, could go on for up to seven years.”

One popular school of Japanese Buddhism, called Amida - or Pure Land - believes in a paradise that spirits of the dead can enter with help from living relatives.

Despite what is likely to be a mass embrace of Buddhist rituals after the earthquake, there may also be some grievances expressed over those traditions.

Many young Japanese have left Buddhism, accusing priests of profiting from grief because of their paid roles in burials. Critics say the priests spend money from funerals on temples without playing a broader role in society.

“The earthquake is an opportunity for Buddhist priests to step up and show they are still relevant,” says Nelson. “Young people just aren’t buying it anymore.”