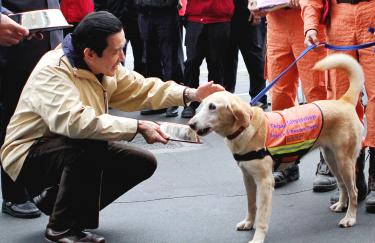 President Ma Ying-jeou gives food rewards to a rescue dog during a visit to the Taipei City Fire Department yesterday.
Photo: CNAPresident Ma Ying-jeou (馬英九) yesterday said he had three wishes for the Year of the Rabbit: that the economy would improve, the nation would become more prosperous and people do more good deeds.

Offering his Lunar New Year greetings in the form of a video recording aired at 5:30pm, Ma said that as the public welcomes the Lunar New Year, he hoped they would look both to the past and the future. In keeping with tradition, Ma said he made three New Year wishes.

The first is that the economy would improve, with more jobs being created and the working population being fully employed.

The second is to see favorable weather for agriculture, national prosperity and peace.

Lastly, he said he hoped people would do more good deeds and take care of the disadvantaged.

“In the next 10 years, we will create a ‘golden decade’ that will lay a solid foundation for another 100 years of the Republic of China,” he said. “We have a 100-year plan for education, the environment and social justice, as well as peace across the Taiwan Strait.”

Taiwanese helped the nation’s economy grow by more than 10 percent last year, with GNP per capita reaching close to US$20,000 and unemployment dropping to 4.67 percent in December, he said.

“We have weathered the global financial crisis,” he said.

“The Directorate-General of Budget, Accounting and Statistics estimates that growth will continue this year, albeit a little slower,” the president said.

Since everyone is living a better life, it is important “to always be thankful and do whatever we can to help others who are less fortunate and worse off, so the elderly, the disadvantaged and people affected by natural disasters can also be loved, cared for and reborn,” he said.

Ma’s video also featured three well-wishers — a senior citizen living in a nursing home, a single mother who works at a dumpling store supported by a Christian church and a physically impaired artist.