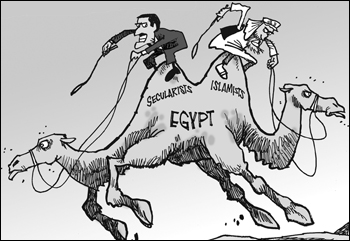 Mubarak must leave to save Egypt

After supporting him with money and weapons for 30 years, the United States and all democracies must insist that Hosni Mubarak heed the voices of his young citizens who call for him to step down immediately and spare Egypt further bloodshed and economic loss.

The young Egyptians who have dug their heels deep into Cairo's Tahrir Square were born during Mubarak's three decades in power. They have known no other president and face a bleak future under his corrupt rule. Inspired by recent events in Tunisia, they finally took to the streets to seek change. Though Mubarak vowed this week to finally step down in September, few believe him, and with good reason: He has reneged on every election promise for political reform made since coming to power in 1981. Only hours after offering this "concession," Mubarak unleashed thugs and provocateurs on unarmed protesters amassed in Tahrir Square. At least five demonstrators were killed and hundreds injured. This followed reports that convicts have been released or escaped from prison, adding to the insecurity and violence on the streets of Cairo.

A president who would condone these crimes against his people and deny all cellphone and Internet access across the country has lost any semblance of credibility. For the vast majority of Egyptians, this is simply the last straw. When Mubarak became president after the assassination of Anwar Sadat in 1981, he vowed to serve only one six-year term. But he has ruled under a "state of emergency" since those chaotic days. Emergency laws enabled him to suspend the rule of law and bypass Egypt's esteemed judiciary. He has systematically eliminated, harassed or defamed any potential alternative to his leadership. He has rigged elections, silenced dissidents and prohibited even small political rallies. He has beaten and jailed democracy activists and sent civilians to military courts. He tightly controls the media and has cracked down hard on young bloggers. (I was tried and convicted in absentia on charges of "defaming Egypt's reputation" for writing on this page in 2007 in support of democratic change.)

Mubarak has continued Sadat's economic liberalization to an open-market economy, but much of the benefits of growth have been skewed toward a narrow group of elites. Corruption around the president's family is legendary and on par with that which toppled Tunisia's Ben Ali ruling family. Meanwhile, roughly a fifth of the Egyptian people live in poverty, and the once-vibrant middle class cannot afford a decent education or the skyrocketing costs of housing, or find jobs.

Mubarak claims he is proud of his record of service and vows to "die on the soil of Egypt." He will allow the country to descend into chaos rather than leave and allow us to rebuild our land. As I write, my wife is reporting sounds of gunfire from several districts in Cairo. We propose a solution to this impasse: In return for Mubarak resigning from the presidency immediately, the United Nations and Western powers could ensure him and his family safe passage to the resort town of Sharm el-Sheikh, where he spends most of his time anyway. He could avoid prosecution by agreeing to return the wealth his family has amassed during its years in power.


According to the Egyptian constitution, the recently appointed vice president would become the interim president until scheduled elections in September. The prime minister has vowed to find and prosecute those responsible for violent attacks of the past 48 hours. He should be supported in restoring law and order and getting the economy back on its feet. He must rapidly bring the brave young protesters into a broad-based national dialogue, along with members of opposition groups, the media, clean elements within the business community and civil society leaders.

With concerted efforts among the reform elements in Egypt and leaders of Western democracies, this scenario could be the way out from today's perilous situation. Egypt's instability threatens peace and stability across the region. Barack Obama and his European counterparts face a moment of truth: They can move rapidly to support the democracy activists who are putting their lives on the line in Tahrir Square, or history may never pardon them.

The writer, an Egyptian sociologist and democracy activist living in exile, is a distinguished visiting professor at Drew University in Madison, N.J.