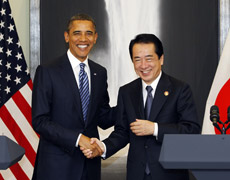 
President Barack Obama's ten-day tour of Asia, just after the Democrats' "shellacking" in the midterm elections, failed to yield some of the hoped-for diplomatic triumphs, including a free trade deal with South Korea. Four CFR experts--Sheila Smith, Stewart M. Patrick, Scott Snyder, and Joshua Kurlantzick--weighed in with these observations during the president's trip.

The two-day Asia-Pacific Economic Cooperation (APEC) summit in Yokohama, Japan, produced a new "vision" for accelerating the pace of trade liberalization in Asia Pacific. Yet the U.S. role in this collective effort seemed diminished coming on the heels of President Barack Obama's announcement that he had failed to finalize the long-awaited U.S.-South Korean trade deal (KORUS). If the United States cannot deliver on its bilateral free trade agreement with South Korea, it is likely that others in the region will worry about the prospects for the proposed U.S. vehicle for regional trade liberalization, the Transpacific Partnership. The Chinese proposal of an ASEAN-Plus-Three arrangement or the Japanese idea for an ASEAN-Plus-Six effort at implementing a more open trade regime may seem like better bets because of those countries' greater apparent eagerness to strike free trade deals in the region.

Summit meetings between Japan's Prime Minister Naoto Kan and two of Japan's neighbors drew more attention within the region. Japan's recent scuffles over territorial issues with China and Russia have created a new wave of turbulence in the diplomacy of Northeast Asia. All eyes were on the discussions between Kan and Chinese President Hu Jintao, which were not finalized until hours before the twenty-two-minute meeting. The fact that the meeting was held at all produced a sense of relief that the two countries could return to some semblance of their prior effort to build a "mutually beneficial strategic relationship."

In talks with Russia's President Dmitry Medvedev, Kan lamented the lack of a peace treaty between the two states. Kan again reiterated Japan's sovereignty over the Northern Territories, which Russian claims as part of its Kuril Islands, and protested strongly the recent visit by Medvedev to one of those islands.

But it is the health of the U.S.-Japan relationship that is key to Japan's ability to work through these difficult times with its neighbors. While the recent tenor of the Washington-Tokyo relationship seems much improved from the strains of last year, only a brief meeting on the sidelines of APEC was scheduled. Obama and Kan only had time to reiterate their past commitments to the bilateral alliance. They made brief statements to the press, in which Obama noted his concerns about China's rise and hinted that the two governments would develop an agenda over the coming months to strengthen U.S.-Japan cooperation.

Read the rest of this entry here.

In their uninspiring communiqu&eacute; from Seoul, leaders of the Group of Twenty (G20) sought to put a favorable gloss on their disappointing summit. But their "pledge to continue our coordinated efforts and act together" could not paper over a sorrier reality: The further the G20 gets from the financial crisis, the farther apart its members drift.

The fractious Seoul summit suggests that policy divergences are the shape of things to come. At the depth of the global crisis, world leaders stared into the abyss and took unified steps to stabilize the global economy. But today, that solidarity is missing. The result, as President Barack Obama conceded in Seoul, was that "Instead of hitting home runs, sometimes we're going to hit singles."

First, confidence in U.S. global economic leadership continues to wane. The Fed's decision to embrace more "quantitative easing" undercut Obama's position at the summit. By exploiting its role as the issuer of the world's dominant currency to improve its competitive position--rather than focusing on the stability of the global financial and economic system--the United States appeared to be engaging in just the sort of currency manipulation it had complained so bitterly about in China's case.

Second, the G20 is not an effective forum to pressure China, at least to date. U.S. officials had hoped to marshal support from countries hurt by an artificially undervalued renminbi. But--as at the June G20 meeting in Toronto--China deftly turned the tables, joining others in attacking U.S. monetary policy. And, as at Toronto, some of the most vigorous disagreements were not between the historic G8 and the G9-20 newcomers, but between the United States and partners like Great Britain and Germany.

Read the rest of this entry here.

Although the main stories of the Obama visit to Korea revolved around the gap between the United States and China on global rebalancing issues at the G20 and the failure of Presidents Obama and Lee to tee up the KORUS FTA, a third issue arose that dramatizes Sino-U.S. differences over the Korean peninsula.

At a Veterans' Day event with U.S. troops hosted at Yongsan, Obama stated that "Sixty years have come and gone since the communist armies first crossed the 38th Parallel . . . as we look around in this thriving democracy and its grateful, hopeful citizens, one thing is clear: This was no tie. This was victory." These comments mark a dramatic contrast with the views of China's heir apparent, Vice President Xi Jinping, who stated the Korean War as "a great and just war for safeguarding peace and resisting aggression. . . . It was also a great victory gained by the united combat forces of China's and the DPRK's civilians and soldiers, and a great victory in the pursuit of world peace and human progress" in comments commemorating the sixtieth anniversary of China's entry into the Korean War only a few weeks ago. Those comments drew a stern and surprised response from South Korean officials. South Korean Foreign Minister Kim Seung-hwan stated that "It's an immutable fact that the Korean War was started by North Korean aggression. I have nothing further to say because the international dispute over the Korean War is over."

The New York Times reported an apparent easing of the South Korean position on what it would take for North Korea to get back to the Six Party Talks, as well as North Korea's unconstructive response. But the differences in the statements between Obama and Xi Jinping hint that the gap between the United States and China over preferred end states on the Korean peninsula is too great to expect the kind of cooperation necessary to move North Korea forward on denuclearization.

These differences underscore the urgent need for a U.S.-ROK-PRC dialogue (PDF) on North Korea-related issues as a prerequisite for progress in addressing issues of long-term stability on the Korean peninsula. Without greater prior understanding among these three parties, the enabling environment for success in any renewal of a nuclear dialogue with North Korea will continue to be absent.

Read the rest of this entry on the Asia Unbound blog.

Overall, I thought that President Obama's short "homecoming" visit to Indonesia went well. He charmed Indonesians, offered some funny reminisces about his youth, didn't give his opponents too much more ammunition to claim he's a Muslim, and set the agenda for the U.S.-Indonesia comprehensive partnership.

But you don't want to hear that; it's more interesting to focus on what went wrong, at least in my opinion.

I have written this several times before, but I do not understand why the White House insists on highlighting Indonesia as a moderate "Muslim democracy," as Obama did again Wednesday while in the country. It is certainly true, as anyone who remembers Jakarta in the late 1990s knows, that Indonesia has made impressive democratic strides, even though President Susilo Bambang Yudhoyono sometimes can be too willing to compromise with anti-reform politicians. And it's also true that Indonesia has the most Muslims of any country in the world.

But highlighting Indonesia as a moderate Muslim democracy, to be emulated, has many flaws. For one, it's viewed by many in the Middle East as peripheral to the debates and currents of thoughts in the Arab-Muslim world; as a result, few Arabs look to Indonesia for guidance on critical social, political, and religious issues.

Secondly, this view of Indonesia basically excludes the country's non-Muslims, when there are important groups of Christians, Buddhists, Hindus, and other religions in the country. There are certainly religious extremists in Indonesia who would love the country to be viewed as a Muslim state exclusively, and they have in recent years attacked Christians, heterodox Muslims, and others they consider non-believers.

Third, and most important, viewing Indonesia in this way trivializes and ignores its many democratic accomplishments, subsuming them to the idea that it's a success story simply because it is free and Muslim. Since the late 1990s, Indonesia has solved several thorny autonomy disputes, federalized a great deal of political and economic power, reined in the army (to some extent), made strides toward greater involvement of women in politics, and taken other critical steps. These should be recognized, but they have little to do with the religion of most Indonesians.