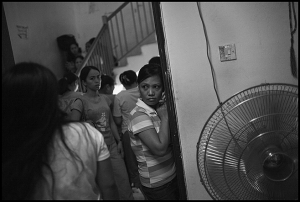 <Workers continue to spend long periods waiting at embassy shelters, including the Philippines safe house, shown here. Since 1992, the Kuwaiti government has relied on deportation as the primary method for dealing with domestic workers who face employment-related problems. Workers reported spending weeks or months in official custody, moving from embassy shelters to police stations, and from there to criminal investigation facilities, before they were sent to deportation detention.>
&copy; 2010 Moises Saman/Magnum Photos>

Sarah Leah Whitson, Middle East director (Kuwait City) - Domestic workers in Kuwait who try to escape abusive employers face criminal charges for "absconding" and are unable to change jobs without their employer's permission, Human Rights Watch said in a report released today. Migrant domestic workers have minimal protection against employers who withhold salaries, force employees to work long hours with no days off, deprive them of adequate food, or abuse them physically or sexually.

The 97-page report, "Walls at Every Turn: Exploitation of Migrant Domestic Workers Through Kuwait's Sponsorship System," describes how workers become trapped in exploitative or abusive employment then face criminal penalties for leaving a job without the employer's permission. Government authorities arrest workers reported as "absconding" and in most cases deport them from Kuwait - even if they have been abused and seek redress.

"Employers hold all the cards in Kuwait," said Sarah Leah Whitson, Middle East director at Human Rights Watch. "If abused or exploited workers try to escape or complain, the law makes it easy for employers to charge them with ‘absconding' and get them deported. The government has left workers to depend on employers' good will - or to suffer when good will is absent."

Kuwait, which has the highest ratio of domestic workers to citizens in the Middle East, announced on September 26, 2010, that it would abolish the sponsorship system (kafala) in February 2011, and replace the employer-based system with a government-administered recruitment authority. While this would be an important reform, the government gave no details on what legal protections would be added for migrant workers in the country, or whether the reforms would cover domestic workers.

The country's more than 660,000 migrant domestic workers constitute nearly a third of the work force in this small Gulf country of only 1.3 million citizens. But domestic workers are excluded from the labor laws that protect other workers. Kuwaiti lawmakers reinforced this exclusion as recently as February 2010, when they passed a new labor law for the private sector that failed to cover domestic work.

"It shouldn't be against the law to run away from an abusive employer," said one activist who regularly counsels domestic workers in Kuwait, and who asked to remain anonymous. "Sometimes these girls, they say, ‘Do you know what happened to me in that house? They hit me, spat on me...how can there be a case against me?'"

Data compiled by Human Rights Watch shows that in 2009, domestic workers from Sri Lanka, Indonesia, the Philippines, and Ethiopia filed over 10,000 complaints about their treatment with their embassies in Kuwait.

The Kuwaiti government's reform of the current sponsorship system, Human Rights Watch said, should include immediate steps to remove "absconding" as a legal violation, and to permit workers to change jobs without an employer's consent. The government should also cease arresting and deporting workers for leaving jobs where employers violated their rights, and should instead provide domestic workers with emergency shelter and expedited complaint mechanisms.

Tilkumari Pun, a 23-year-old domestic worker from Nepal, told Human Rights Watch that she worked for 13 months without getting paid. She repeatedly asked her employers for her wages so that she could return to Nepal, where her father needed a heart operation. After waiting 10 months for her employers to make these arrangements, she said, she went to the police for assistance, but they detained her. From the police station, she said, "I had to go to the CID [Criminal Investigations Department]. Baba and Mama [my employers, had] filed a police case against me."

"Walls at Every Turn" is based on interviews with 49 domestic workers, representatives from sending country embassies in Kuwait, and Kuwaiti government officials, including representatives from the Labor and Social Affairs Ministry and the Interior Ministry. Human Rights Watch also interviewed employers, local human rights and civil society advocates, lawyers, and academics.

The domestic workers interviewed cited a variety of abuses by their employers, including nonpayment of wages, refusal to grant days off, and physical or sexual assault. But they said they had found it virtually impossible to pursue their complaints.

They found that they could only pursue a legal claim if they were willing to wait weeks or months in a crowded embassy shelter while negotiations with their sponsor, or a protracted legal case, proceeded. An "absconding" report by the employer immediately invalidates a migrant worker's legal residency status, leaving her with no legal way to work and send money home while awaiting resolution of her claim.

"Domestic workers often depend on the salaries they earn to support families back home," Whitson said. "These workers should not have to wait for months in crowded shelters with no chance to work or even move freely, when many of them have already experienced rights violations."

Domestic workers, excluded from labor laws, face particularly difficult legal battles to claim wages owed. Proving exploitation or abuse can be difficult due to the limited evidence available from inside private homes. Kuwait provides no expedited labor courts despite the country's huge population of migrant workers and the fact that wage complaints top the list of workers' grievances. Long waits, poor information about their rights and options, and slim chances of achieving justice mean that many workers give up on redress.

Even when domestic workers opt not to pursue claims, they still face lengthy delays before they can leave the country. Very few workers interviewed by Human Rights Watch who had left their jobs had successfully retrieved their passports from their former employers after leaving. Employers confiscate passports to delay workers' departures from the country, and to use this as a bargaining tool in negotiations. Workers whose employers register them as "absconding" often have to spend additional time waiting for government authorities to clear them of the charge before they can return home, even in cases where the worker had escaped from abusive employers or had completed her contractual obligations.

Nur W., an Indonesian worker interviewed at a government deportation detention center, said that her employer denied her permission to return home at the end of her two-year contract and also refused to return her passport when she ran away. "I went to my embassy," she said. "They called Mama [my employer] from there. Mama still said no [to returning my passport.] I had to go to deportation."

"Workers who have been forced to work without pay, deprived of food, or treated inhumanely should not have to go to detention centers or jails, or to return home through deportation proceedings," Whitson said. "The government should provide workers who report claims of employer abuse with shelter, and remove these burdensome legal hurdles that employers can impose even on women who have already suffered mistreatment."

While the Kuwaiti government currently maintains a 50-bed shelter for domestic workers, only embassies can refer workers there, and only after the police have cleared them of all charges, meaning that women typically wait long periods in their embassy shelters before reaching the government facility. When Human Rights Watch visited the facility, it was operating under capacity, despite the pressing need for shelter hundreds of domestic workers face, and overcrowding at embassy shelters.

"When unscrupulous employers exploit domestic workers, the government should not punish them further," Whitson said. "Government officials have been discussing kafala reform for years, but the time has come to implement measures that will protect workers' rights in practice - not just on paper."