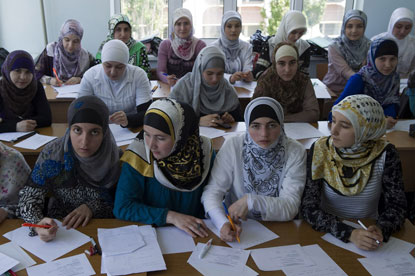 Kremlin in the Caucasus: Pushing for a Moderate Islam

The Russian government will spend $13 million each year to support education. Critics are unsure of the impact on the conflict-torn region.

On a recent weekend morning, six young women covered in long, colorful dresses and headscarves waited impatiently for a bus to pick them up at their campus, the North Caucasus Islamic University Center of Education and Science in Makhachkala, the capital of Dagestan. Serious and silent, the first-year students were preparing for their first "zairat," a seminal visit to a sheik and a ritual in Sufi Islam.

"This day is the most important one in my life," said Renata, an 18-year-old student and follower of Sufiism, a mystical movement within Islam. "I am going to find out if I can become my teacher's murid," or follower. "My heart will know the answer as soon as I see the sheik."

The form of religion practiced by Renata and her fellow students is a moderate stream of Islam that the Russian state has begun to encourage and subsidize in an effort to combat the religious extremism that has taken hold in Dagestan and other Russian republics in the North Caucasus.

Dagestan is racked by a low-level guerrilla war, a complicated and painful conflict rife marked by suicide bombings, the assassination of police, mayors and religious leaders, and the abduction and murder of peaceful Muslims. These crimes are interwoven with ethnic strife, internal corruption, poverty and unemployment--all of it tighter than the threads in a handmade Dagestan rug.

In an effort to counter the proselytizing of Islamic fundamentalists often funded by foreign governments, the Russian government is underwriting the education of moderate religious leaders and teachers at seven Islamic Universities in Moscow, Tatarstan, Bashkyrkostan and in four North Caucasus republics, including Dagestan.

Rufik Mukhamedshin, the rector of Russian Islamic University in Kazan, said he hopes the state will also standardize diplomas issued by Islamic educational institutes and ensure they are accepted across Russia as proper academic qualifications.

The Kremlin's Fund for the Support of Islamic Culture, Science and Education will spend about $13 million a year on educational, scholarship and publishing programs. At Renata's university, the school's leadership is clear about its goal to propagate a form of Islam that the government finds acceptable. Besides Islamic subjects, the 1,500 students at the University Center study journalism, economy, state history, law and finance.

"As reformers, we are creating unified educational methods for training future schoolteachers of Islam," said Maksud Sadikov, chairman of the recently founded Russian Council of Islamic Education.  "We need to educate imams for at least 2,500 mosques registered in Dagestan and hundreds of teachers for Islamic elementary schools, madrasas and universities...We are also training consultants for the police and the Federal Security Service to help fight extremism and radicalism in the republic."

But the creation of an officially sanctioned version of Islam and the marginalization of those who fail to subscribe to it is fueling violent extremism, not tamping it down, according to some human rights activists.

"To reform Islam in Russia, the authorities need to make an effort to listen to all religious leaders, and not just to the loyal ones," said Tatyana Lokshina, deputy director of Human Rights Watch. "The development of civil society institutions that would protect human rights is the solution to Dagestan's issues."

Yet some ordinary Dagestanis say there is only one form of Islam accepted, and no room to follow a conservative idea of Islam without repression.

Aisha Yusupova said she divorced her husband Eldar Naruzov to ease the police pressure on her family, which she described as Salafi, a puritanical or fundamentalist branch of Islam.

"I was tired of him being constantly detained and persecuted for allegedly helping the extremist underground in the mountains," said Yusupova, a 30-year-old mother of four.

She said that her divorce did not make her life easier, and that she is under constant surveillance. "Yes, I am a Salafi," she said, "but I am a peaceful Muslim and I want to be left alone, if not understood."

Immediately after the fall of the Soviet Union, Dagestan and other republics experienced an influx of Arab ideologues promoting a fundamentalist brand of Islam that had nothing but contempt for local traditions, according to local Sufis.

"They taught us Arabic. They brought us trucks full of Wahhabi literature translated into Russian," said Patimat Magomedova, 37, a schoolteacher, referring to the Saudi, fundamentalist interpretation of Islam. "They told us not to recognize Sufi sheikhs, or any of our traditional knowledge of Islam."

"One of the most important ideas behind our reform of Islamic education is to provide students with fundamental knowledge of Islam at home, in Russia," said Yuriy Mikhailov, an author who has urged the Kremlin to underwrite moderate education programs and institutions.

"And then later, when they turn 25, they can continue their graduate and post-graduate programs at universities that Russia has agreements with. The state needs to keep records of students getting education abroad, and of universities they go to."

Not all the Islamic universities of Dagestan want funding or help from Moscow. About 150 miles south of Makhachkala, in the five-thousand-year-old town of Gubden, the Islamic community has survived political changes.

In Soviet times, Gubden's madrasah was turned into a culture club. The Alims, or men of learning, continued to teach children secretly at homes, using old Arabic books. In the last decade, Gubden's conservative Islamic community reconstructed their Madrasah. Imams put money the town's believers contribute together to build small businesses to keep the schools independent financially. They own a gas station and founded their own fire brigade.

Last year Gubden's university lost its state license, but the rector of Gubden Madrasah and University, Akram, said that it did not stop his 500 or so students from attending lessons.

"All we want from the state is to please leave us in peace, please leave us alone. We taught our children Islam for hundreds of years, we have our old books and our Alims to teach Islam, Praise Allah," rector Akram said.

The rector introduces reporters to his students, hundreds of children and college students in every classroom of Gubden's Madrasah. They sit on the floor swaying from side to side, learning the Koran by heart.

This is not the kind of teaching the Kremlin's educational leaders have in mind.

Like Lokshina of Human Rights Watch, Mikhailov argues that different views of Islam should be vented, not suppressed.

"Dagestan cannot solve its problems only by police methods - this way we just push the religious opposition out of our society and into the guerilla movement," he said. "Free media and civil society should become the channels for the heated emotions instead. And that is the biggest gap in our work."

16 million
people in Russia, or approximately 11 percent of the population, profess a Muslim faith, though estimates vary.

$30 million
was spent by the Russian Ministry of Education and Science on Islamic education throughout the country.

2.5 million
Muslims - mostly immigrants - are estimated to reside in Moscow, more than any European capital except Istanbul.