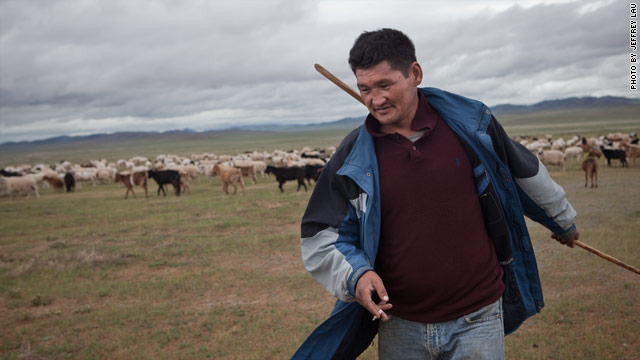 By Kit Gillet for CNN

For 38-year-old Bayanzul it was just one winter too far. After losing a third of his herd in the -45 degree temperatures that struck Mongolia last winter, the long-time herder has decided to give up on the nomadic life and try his luck in the city.

"Last winter was just too hard," he says as he guides his herd slowly across the pastureland towards the markets in Ulan Bator, the country's capital. "I am going to try to sell everything and get enough money to buy a small minibus and charge people for rides."

Mongolians are used to severe winters, but last year's was one of the coldest in recent history.

"During the worst of it I was collecting 20 animals, bringing them inside the tent to keep warm and giving them some grain," Bayanzul says. "Then after a few hours I would move them out and bring in a new lot. It was like this all day, every day and I still lost all 100 of my cows and over 300 goat and sheep to the cold."

The United Nations Development Program estimates more than 7.8 million animals -- 17 percent of the country's livestock -- died in what is known as the dzud, a bitterly cold winter which followed a summer drought.

It has become so difficult to make a living on what is left of the devastated landscape that many of Mongolia's remaining 800,000 nomadic herders are being forced to move to urban sprawls in search of work.

Despite a cash-for-carcasses initiative that offers short-term financial support for those who help clear away the remains of the country's decimated herds, the U.N. estimates that around 9,000 households have been left with almost no livestock at all, and 32,700 have lost at least half of their animals.

"This disaster was a little bit different from an earthquake or tsunami where the disaster happens and then you start to rebuild," says Shoko Noda, deputy resident representative of the UNDP. "This one continued, and the disaster came in a gradual phase. There are herders who have lost their livelihood completely."

Experts predict that tens of thousands of former herders and their families will eventually migrate towards growing towns and cities. Many are expected to end up living in the ger district in the north of Ulan Bator, an unpaved and water-short region that is now home to one quarter of the country's 2.7 million population, and where unemployment is estimated to run at approximately 50 percent.

It is not an easy transition for new migrants used to wide open spaces. "We used to have about 1,000 animals -- horse, cow, goat and sheep," says 40-year-old Bolormaa. "But we lost most of them in the 2005 dzud and never managed to recover."

In 2009, having sold their last animal, she moved with her husband and three children to the ger district in Ulan Bator to try to find work. It was not until June of this year that her husband found a job, as a security guard at a private bus company where he earns $146 a month. Their 22-year-old daughter works in a bread factory.

"It is still difficult trying to get used to this life, having lived all my life as a herder and now having no animals to watch over," she says as she sits in the family's bare yurt with rubbish piled up outside. They had to pawn most of their possessions to afford to send their eldest son to university and their youngest to high school. "Life is hard in Ulan Bator and city people don't like us people from countryside."

"Unemployment is the main problem for those who switch the countryside for the city," says Bolormaa Gulguu, a program officer for Save the Children in Mongolia. "They cannot get access to jobs. When they lived in the countryside they are herders; they have been herding for generations. But when they come to Ulan Bator they don't have the vocation skills that are needed to get a job. Some get involved in informal work at the black market, but many just rely on government benefits."

According to a World Bank report on the ger districts published earlier this year, government benefits represent 20 percent of the region's total income. Of those who found work, almost a third were employed in low-skilled jobs in the construction and manufacturing industries.

For herders like Bayanzul, who did not lose their entire livestock and are thus able to enter the city with some money saved, life may not be so hard, but finding a new profession and getting used to an urban existence will not be easy.

"The first year will be hard, I will miss the animals and countryside," he says mournfully, as he looks out over his herd. "But I can't go through another winter like the last."