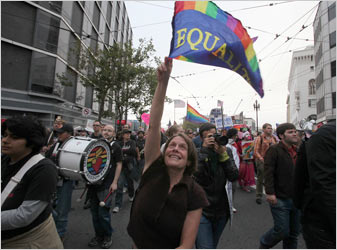 <In San Francisco on Wednesday, supporters of a judge’s ruling overturning Proposition 8 held a celebratory rally and a march to City Hall.>


Gay Marriage Ruling a Challenge for Both Parties

A federal judge’s decision on Wednesday overturning Proposition 8 — California’s ban on same-sex marriage — has tossed a largely unwanted issue into the middle of the November midterm elections.

The latest on President Obama, his administration and other news from Washington and around the nation. Join the discussion.

The decision, which ruled Proposition 8 unconstitutional, has complicated the political tasks before President Obama, whose aides had to explain in the wake of the decision that the president supported equal gay rights but opposed marriage rights for gay men and lesbians.

Meanwhile, Republicans said that dwelling on the issue could become a distraction in the effort to win back the House or Senate from Democrats this fall. At a meeting of the Republican National Committee in Kansas City, Mo., several party leaders and strategists said it would be a mistake for the midterm election campaign to suddenly become focused on gay marriage, immigration or other hot-button issues. The only path to winning control of Congress, they said, rested on making an economic argument.

“This election needs to revolve around five issues: taxes, spending, the economy, jobs and debt,” said Ron Nehring, chairman of the California Republican Party. “That doesn’t mean that other issues aren’t important — they are important — but the first issue on the minds of people is the economy.”

Yet, the dread over the same-sex marriage issue was almost palpable as Mr. Obama’s senior adviser David Axelrod tried to explain on MSNBC on Thursday that Mr. Obama opposed same-sex marriage, “But he supports equality for gay and lesbian couples, and benefits and other issues, and that has been effectuated in federal agencies under his control.”

Regardless of worry among party leaders, advocacy groups on both sides made it clear they planned to make same-sex marriage an issue.

“Celebrate this incredible victory by defending it,” read one e-mail that went out just after the decision was released. “Will you give just $1 a day to help California’s largest L.G.B.T. Political Action Committee elect a governor and attorney general who will refuse to appeal this ruling?” L.G.B.T. stands for lesbian, gay, bisexual and transgender.

The pitch — sent to more than 300,000 supporters of Equality California, the state’s largest gay rights group — was matched by those on the other side of the issue: the National Organization for Marriage blasted some of its 250,000 subscribers with a plea for cash, readied online advertisements rallying people against Judge Vaughn R. Walker’s decision, and prepared for an Aug. 15 rally at the Capitol in Washington. Other conservative groups were ramping up campaigns against moderate Republicans — like Bill Binnie in New Hampshire and Tom Campbell in California — who are believed to be sympathetic to same-sex marriage rights.

“I definitely think it’s going to have an effect on the 2010 elections,” said Brian S. Brown, the executive director of the National Organization for Marriage, who called the decision the beginning of a “major national culture war.”

But veterans of the past culture wars say that many people’s attitudes have changed about gays in America. “I think it still enflames part of the right, but I think increasingly it alienates swing voters,” said Robert Shrum, a senior adviser to John Kerry’s presidential campaign in 2004, when same-sex marriage was seen a valuable wedge issue for Republicans.

Mr. Shrum noted that five states and the District of Columbia allowed same-sex marriage — only Massachusetts did in 2004 — and that the danger for some candidates who oppose gay marriage could be the perception that they are intolerant. “People have got comfortable with the idea,” he said of same-sex marriage. “And increasingly uncomfortable with the idea of rank discrimination based on someone’s sexuality.”

Likewise, Murray Clark, chairman of the Indiana Republican Party, said Republicans were acting at their own peril if they suddenly starting focusing on the ruling. A protracted discussion about social issues, he said, could play into Democratic hands. “Can we declare a truce on some of the other issues unrelated to the economy?” Mr. Clark said in an interview in Kansas City, Mo.

For Democrats, meanwhile, who are already fending off charges of overexpanding the federal government, Judge Walker’s decision on Proposition 8 — which set aside a 2008 voter initiative that passed by 52 percent of California voters — also touched on the sensitive issue of states’ rights. In his answers to MSNBC, for example, Mr. Axelrod was careful to note that Mr. Obama had respect for local voters, even if he did not agree with their decision to support Proposition 8. “He does believe that marriage is an issue for the states,” he said.

Mr. Brown said the decision — the first of its kind at a federal level — had effectively “nationalized” the issue. “Two years ago, three years ago, you had some Republicans saying, ‘I don’t see a threat from the courts,’ ” he said. “Well, Judge Walker made clear that the threat is not only coming, it is immediate.”

Maggie Gallagher, president of the Institute for Marriage and Public Policy, which opposes same-sex marriage, agreed, saying that her group was looking even further down the line with the case, which was appealed Thursday by supporters of Proposition 8 and is likely to go all the way to the Supreme Court. “We are also looking for opportunities to demonstrate that pro-gay marriage Republicans lose,” she said in an e-mail, “and to lay the groundwork for a federal marriage amendment, if the Supreme Court refuses to respect people’s right to vote for marriage.”

For gay groups in California, meanwhile, the 2010 race is a chance to prove power at the ballot box. At a rally in San Francisco on Wednesday night, Geoff Kors, executive director of Equality California, told the crowd, “Marriage equality is on the ballot this November.”

In particular, Mr. Kors said that the issue could arise in the race for the 45th Congressional District in Southern California, where the incumbent, Mary Bono Mack, a Republican, is facing a challenge from Mayor Steve Pougnet of Palm Springs, who is openly gay. “We will do work on that race,” Mr. Kors said.

Statewide, Democrat Jerry Brown — seeking to return to the California governorship, a position he held from 1975 to 1983 — has been vocal in his support of gay marriage rights, while his Republican opponent, Meg Whitman, has said she supports domestic partnerships, which afford many of the same rights. In a statement, Ms. Whitman said that she supported Proposition 8, but that Judge Walker’s “ruling is the first step in a process that will continue.”

For some, the political world was also colored by certain personal passions. Olivia Monesano, a 29-year-old waitress from San Francisco, was one of hundreds who marched in support of Judge Walker’s decision on Wednesday.

She held a campaign sign for Gavin Newsom, the handsome San Francisco mayor and current candidate for lieutenant governor, who touched off much of the debate in 2004 when he ordered a city clerk to start issuing marriage licenses to same-sex couples. “I’m definitely voting for him: he’s been for gay rights from the beginning, he’s a gay icon,” Ms. Monesano said. “And he’s hot.”