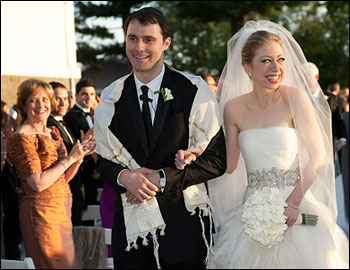 
The wedding this weekend of Chelsea Clinton and Marc Mezvinsky is big news in the town of Rhinebeck, the location of the private nuptials.

Discussion PolicyYour browser's settings may be preventing you from commenting on and viewing comments about this item. See instructions for fixing the problem.
Discussion Policy CLOSEComments that include profanity or personal attacks or other inappropriate comments or material will be removed from the site. Additionally, entries that are unsigned or contain "signatures" by someone other than the actual author will be removed. Finally, we will take steps to block users who violate any of our
RHINEBECK, N.Y. -- The wedding spectacle known for its hype, rumors, political intrigue and breathless celebrity speculation got under way Saturday night, as Chelsea Clinton tied the knot with her longtime boyfriend at a historic estate in Upstate New York.

The happy couple -- a former first daughter and Marc Mezvinsky, an investment banker and political offspring himself -- successfully kept details of their sumptuous celebration more or less mum, especially the exclusive guest list. After dark, former president Bill Clinton and Secretary of State Hillary Rodham Clinton allowed a statement about their "great pride and overwhelming emotion," and their staff offered a few grace notes about the interfaith ceremony, which was conducted by Rabbi James Ponet and the Rev. William Shillady. (Mezvinsky was raised in the Jewish faith, while Clinton is a Methodist.) Along with their vows, there was a reading of the Seven Blessings, a Jewish tradition.

This amounted to the first official confirmation of an event marked by efforts at secrecy. The party venue, the Astor Courts estate, was never actually confirmed, even as long-gowned, tuxedoed invites arrived at 6 p.m. In truth, any doubts that Rhinebeck was not the venue were dispelled Friday at lunchtime, when Bill Clinton bounded into at a local restaurant. Fellow diners were dumbstruck as he went from table to table, shaking hands and apologizing for the commotion that has beset the quiet community.

By noon on Saturday, the celebrity spotting had become an enthusiastic diversion in Rhinebeck, and the sightings became ever more common. Actors Ted Danson and Mary Steenburgen, by their amiable presence, revealed themselves as among the 400-plus who made the final cut. Steenburgen, a long-term friend of the Clintons from Arkansas, confirmed that guests had been sworn to secrecy, but said Chelsea was a "beautiful person" and that she and Mezvinsky had always been determined to do the wedding their way.

A little later, at the Gigi Trattoria restaurant where the former president enjoyed a Friday lunch, fashion designer Vera Wang wandered out. Her spare stylings had been an early favorite as Chelsea's wedding dress of choice. Wang found herself surrounded by a crowd within moments before being whisked away by a bodyguard.

Madeleine Albright, former secretary of state, left soon after, having lunched with Terry McAuliffe, former chairman of the Democratic National Committee. They were making the most of their trip to the region, seen Saturday morning, along with attorney Elizabeth Bagley, visiting the nearby Franklin D. Roosevelt Presidential Library.

Tinted windows on shuttle buses kept other guests shielded from snapshot-takers and gawkers. Despite the invasion of political heavyweights and A-listers, some spectators would not settle for anyone less renowned than Oprah Winfrey, Barbra Streisand or Steven Spielberg, who were rumored to be invited, and then rumored not to be invited, and were, at any rate, nowhere to be seen.

On Friday night, crowds gathered outside the Beekman Arms, another hotel fully booked by the wedding party. Guests, including the bride's parents, were seen heading from a rehearsal dinner to a cocktail party at the local tavern.

The frenzy has been a shift for Rhinebeck, an upmarket village whose citizens pride themselves on living quietly with wealthy neighbors in their midst. By Saturday evening, every local had a war story about how they or a friend had been interviewed by journalists from Poughkeepsie to Japan. On Friday, Wayne Brandes, a retired electrician, hawked commemorative T-shirts. A pizza purveyor gave out free slices of its "wedding special" (with pepperoni spelling out "I Do"), while a local deli offered a "Hillary's Secretary of Steak" sandwich.

Not everyone was overjoyed, though. Some residents on River Road, leading to the Astor estate, said they were annoyed by the disruption. Others, noting road closures and security squads, complained that Chelsea was being treated like royalty. Planners sought to soothe ill feelings by delivering bottles of wine to neighbors, along with permits to ensure they could pass roadblocks.

On the whole, however, leafy, normally sleepy Rhinebeck seemed happy to have a moment in the spotlight.