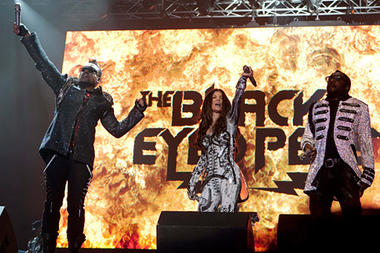 Mexico City
Mexico staged a handful of protests today against the new immigration law in Arizona, where up to 530,000 undocumented workers live and 88.6 percent of the Hispanic population is Mexican.

Arizona immigration law 2010: As SB1070 takes effect, Mexicans say 'Adios, Arizona' Why Judge Susan Bolton blocked key parts of Arizona's SB 1070 With ruling, battle over Arizona immigration law enters new phase The country was joined by Black Eyed Peas star Taboo, who debuted a protest video online this week against the law. "I believe there's been an injustice in the state of Arizona," Taboo, a Mexican-American, says in the video (below). "I oppose Bill 1070."

Protests against the law have crossed international borders – with a rallies also held Thursday in the United States and El Salvador – and spanned artistic genres, with a growing roster of musicians – from American metal band Rage Against the Machine to Mexican rockers Caf&eacute; Tacvba – joining in a ban on playing concerts in Arizona.

In Jalisco state's capital of Guadalajara, dozens of demonstrators filled the main square in solidarity with migrants in Arizona on Thursday. They denounced the law even though its key provisions were blocked by a US judge on Wednesday.

"We are against the spirit and letter of the Arizona law,” Gilberto Parra, a former congressman, said in a telephone interview from the demonstration. “We are calling on our government to demand that Barack Obama pass a comprehensive reform for all workers in the United States.”

Activists called on residents of Nogales, Sonora, not to cross the border into Nogales, Arizona, on Thursday and to gather for an afternoon protest instead, a local Sonora newspaper reported.

In Mexico City, demonstrators marched outside the US Embassy on Wednesday. When they learned of the US judge’s decision to freeze the most controversial elements of the law, they broke into applause and shouts of “Si Se Pudo” (Yes We Could).

'Step in the right direction'
Wednesday’s 11th-hour injunction blocked the most controversial elements of the law, including requirements that police check the immigration status of suspected illegal immigrants. The injunction also froze sections of the law making it a state crime for undocumented migrants to work or for foreign residents to fail to carry immigration documents. But provisions that prohibit employers from hiring illegal migrants, or from stopping a car to pick up day laborers, remain in the law.

Mexico, along with 11 other Latin American countries, in June had filed an amicus brief in favor of a US federal lawsuit that sought to strike down the Arizona immigration law. Mexico’s Foreign Affairs Ministry on Wednesday called the injunction a “step in the right direction.”

While many here celebrated the decision, those with family in Arizona or other states seeking to pass similar laws say the danger is far from over.

Five US states have already introduced a bill and at least 20 others are reportedly considering it, among them Oklahoma.

'No desire to go to US'
Mauricio Perez, a Mexico City resident whose uncle lives in Arizona, says that even if the law is eventually reversed, it has already damaged the relationship between Mexico and the United States.

“Just seeing how they treat your own family, it leaves me with no desire to go to the United States, not even for a visit,” says the 26-year-old furniture salesman.

Officials here have warned that the new law could spark the return of Mexicans across a deadly international border. More than 150 migrants have died trying to cross the border into Arizona this year, Mexico's Foreign Affairs Ministry said in a statement Thursday, and shelters in the border state of Sonora are already preparing for an influx of migrants returning home as a result of the new law.