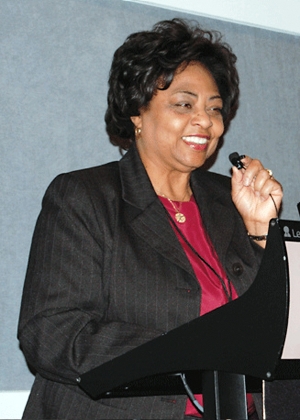 The Sherrod brouhaha is distressing evidence of why we can’t have an honest public discourse about race.

Former USDA official Shirley Sherrod is at the center of a racially tinged firestorm.
Taken on its merits and in context, it was a beautiful tale of redemption and reconciliation: a story of one woman’s journey from anger to compassion. But in the end, it became something infinitely less lovely: a sign of the stupidity of soundbite culture, of the pitfalls of racial hypersensitivity, and, perhaps most sadly, of the difficulty—indeed, maybe even the impossibility—of having (in this society, at this moment) a truly honest public discourse about race.

The woman at the center of the storm, Shirley Sherrod, was an unsung Department of Agriculture employee until a clip posted on a conservative Web site seemed to show her admitting bias against whites. Conservative talk-show hosts bayed for blood; Sherrod was forced to resign. (The matter was deemed so urgent that she was ordered to pull to the side of the road and compose the resignation letter on her BlackBerry.) Then, when the full-length video of her speech revealed that instead of discriminating against a white couple, she had gone out of her way to help save their farm, Sherrod was swamped with apologies, was offered a new job at the USDA, and received a seven-minute phone call from President Obama.

The American public, meanwhile, was left to wonder what the moral of this tale really is. For starters, it’s about the idiocy that can follow when ideology replaces journalistic integrity. Real journalists draw conclusions from facts. The ideologues who attacked Sherrod forced facts to fit their preconceived notions.

But this state of affairs in the U.S. media has broader and more insidious repercussions, as Charles Ogletree, one of Obama’s professors at Harvard Law School, makes clear in a new book. The Presumption of Guilt is an exhaustive account of the events that led to the arrest of Harvard professor Henry Louis Gates, who initially was suspected of breaking into a home that turned out to be his. After Obama criticized the Cambridge, Mass., police for acting “stupidly,” conservative talkers exploded in rage, accusing the president of being a racist himself. The ensuing controversy threatened to derail Obama’s health-care package. The White House tamped it down with a silly “beer summit” between Gates and the arresting cop. What could have been an interesting discussion about police authority and race in America was reduced to a narrative about two men who might have been friends had they only shared a Bud Lite.

That incident demonstrated how difficult it is for this nation’s first black president in particular to talk about race. With conservative pundits and activists predisposed to accuse him of catering to blacks, it seems better that Obama keep his mouth shut—and for members of his administration to go out of their way to show they have zero tolerance for bias from any quarter, black or white.

Conservatives would be suspicious of any Democratic president. But Obama’s race seems to complicate things—particularly among certain groups. A New York Times/CBS poll of Tea Party supporters found that 73 percent believed Obama did not “understand the needs and problems” of people like themselves; 75 percent thought he rejected “the values most Americans try to live by.” And a majority thought “too much has been made” of problems facing blacks. “What is really bothering these people is a sense that their position in the society is threatened, that they are going to be worse off tomorrow then they are today,” says Cesar Perales, president of LatinoJustice PRLDEF. That anxiety, he believes, is rooted not just in America’s economic troubles but in its demographic transformation: “Large numbers of Latinos, particularly darker-skinned Latinos, [are] coming into the country…[And] having a black president makes it worse because that is evidence to [many] Americans that their world has changed,” Given such fears, any sympathy Obama shows toward minorities is likely to be widely misconstrued.

In the long run, I believe Obama’s presidency will have a powerful and positive impact on race relations. The presence of a thoughtful, competent black man at the helm of the world’s most powerful nation cannot help but change attitudes for the better. The irony is that in this area, as in no other, he is barred from using his eloquence. For him to speak honestly, in ways that really could contribute to intergroup understanding, means risking the wrath of the right. Despite his platinum tongue, Obama’s most important contribution to race relations will almost certainly have to be in what he is, not in what he says.