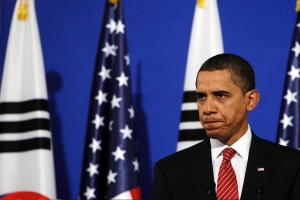 How Obama Lost His Asian Friends

President Barack Obama during a press conference in Seoul, South Korea, last year
While European leaders squabbled over the right kind of deficit reduction and whose country boasts the finest football side, Barack Obama used the recent G20 summit of leading economic powers in Toronto to make a different case: that the United States is dedicated to building a closer relationship with Asia. Though the Gulf of Mexico oil spill and the firing of Gen. Stanley McChrystal had distracted him before the summit, the president spent much of his time at the meeting with Asian leaders, including private sit-downs with the leaders of Japan, Indonesia, China, India, and South Korea. During the summit Obama also invited Chinese President Hu Jintao to Washington for a state visit, the kind of formal occasion Chinese leaders crave. “You’ll note that five out of the six bilaterals mentioned are with Asia-Pacific countries,” one senior administration official told reporters in a briefing about the G20 meeting. “That is, I think, an eloquent demonstration of the importance that the president attaches to Asia, the importance of Asia to our political security and economic interests.”

Obama tried to deliver some concrete results as well to demonstrate his focus on Asia. After a year of suggesting the administration might just scuttle the U.S.–South Korea free-trade deal signed during the Bush administration, in late June Obama announced that the White House would push for its ratification, which would create the most important American trade deal since the North American Free Trade Agreement was passed early in the Clinton administration. Obama also set a specific timetable, calling for the Korea deal to be completed by November.

But he has made similar moves before, only to abandon them. In the early days of his administration, he declared himself the first “Pacific president” and said he wanted to distinguish himself from George W. Bush by sending the message to the world’s fastest-growing and most populous region that America is once again engaged in Asia. At a regional Asian gathering in July 2009, Secretary of State Hillary Clinton said the “United States is back” in Asia. The White House built on that promise by quickly notching a series of Asian triumphs. It acceded to the Treaty of Amity and Cooperation, a cornerstone of the Association of Southeast Asian Nations and a document the Bush administration had refused to sign. Last November, Obama sat down with all 10 ASEAN leaders, the first time an American president had taken that step. The White House launched plans for a “comprehensive partnership” with Indonesia, a country where Obama, unlike Bush, enjoyed enormous popularity, in part because he spent four years of his childhood in Jakarta. Result: early in his term he boasted high approval ratings nearly everywhere in Asia, from Indonesia to India and even China, where two thirds of respondents in one BBC poll believed America’s relations with the world would improve under Obama.

But then these efforts began to go downhill. Distracted by the Middle East, the war in Afghanistan, and an increasingly toxic political environment at home, Obama made little progress with Asia. He appeared distrustful of the new Japanese government and unsure of how to build on the relationship with India. In early June he canceled a planned trip to Indonesia—for the third time—angering many of his Indonesian supporters and reminding Asians of the Bush administration, which also did not seem to understand the value of putting in face time to improve diplomacy in the region. The Obama White House also invested precious little capital pushing trade initiatives in Asia. And even with the region’s giants—India, Japan, and China—the administration often appears to be ignoring their central concerns or simply alienating their leaders.

The Obama administration had hoped to make its greatest inroads in Asia with Indonesia, raising the bilateral relationship to the level of ties with India or Singapore, close economic and security partners of America. The proposed comprehensive partnership includes cooperation on everything from climate change to trade. Even the Pentagon, which cut ties to the Indonesian military after massacres in East Timor two decades ago, was pushing for renewed links including increased U.S. assistance for Kopassus, the Indonesian special forces. But then, citing pressing business at home—first the health-care-reform bill, then the Gulf of Mexico oil spill—Obama started canceling his visits. In doing so, notes Walter Lohman of the Heritage Foundation think-tank, he revealed that he had not planned well for the possibility that domestic challenges like health-care reform might overlap with his foreign trips. Now Obama can no longer count on good will in Jakarta, where many leaders were reportedly furious. Already, Indonesians had removed a statue of him that had been built in a public park in Jakarta. Since the president was supposed to travel to Australia as well on these jettisoned visits, he also wound up snubbing one of America’s oldest allies in the Pacific.

India, which during the Bush administration overcame decades of anti-Americanism to build a close friendship with Washington, has also fared poorly with Obama. Although Obama hosted Prime Minister Manmohan Singh for a state dinner, the president infuriated New Delhi by issuing a statement last November calling on China and the U.S. to work together to promote peace in South Asia, signaling to India that Washington was inviting China to meddle in India-Pakistan affairs. Evan Feigenbaum of the Council on Foreign Relations argues that New Delhi and Washington have also developed sharp disagreements over America’s Pakistan and Afghanistan policy, which has only further alienated New Delhi. And the new U.S.-India strategic dialogue, launched in June, appears to be little more than a talk shop, even though New Delhi wanted the White House to use this forum to publicly back India’s bid for a permanent seat on the U.N. Security Council. At the time of the dialogue, the American assistant secretary of state for South and Central Asian affairs, Robert Blake, even admitted to reporters, “We’re really not focused that much on deliverables” at the dialogue.

Although the White House has hardly ignored China, and Obama has sought out Hu for lengthy private conversations, the White House’s conciliatory policy toward Beijing has alienated America’s Asian friends, like India and Singapore. The Obama administration at first refused to meet the Dalai Lama when he visited Washington; during a visit to China last year Obama pointedly avoided mentioning thorny human-rights issues, and he has subsequently declined to take a publicly aggressive stance on China’s alleged currency manipulation. His reluctance to play tough with China prompted Asian elder statesman Lee Kuan Yew, during a visit to Washington last autumn, to urge the president on, saying, “If you [the U.S.] do not hold your ground in the Pacific, you cannot be a world leader.”

For India, China, Indonesia, and every other high-growth economy in Asia, trade liberalization now is just as important as security partnerships. China already has a free-trade agreement with the 10 nations of ASEAN, and every week seems to bring news of a proposed new Asian trade deal with partners other than the U.S., including an India-ASEAN agreement and a South Korean deal with the European Union. But with the United States stuck in a period of prolonged economic weakness, Obama appears to have no appetite for any Asian trade agreements. Despite his decision to push forward with the South Korea deal, the administration has suggested that the two sides renegotiate pieces of the agreement—a move that could anger Seoul and scuttle the deal altogether. What’s more, the new Asian trade vehicle Obama is promoting, the Trans-Pacific Partnership, seems far from having any real substance.

America’s ties to Japan, long its closest ally in Asia, have deteriorated the most. To be fair, some of that animosity is due to the often incoherent policymaking of the Democratic Party of Japan, which demanded that the U.S. leave its military bases in Okinawa, then backed down. But the White House did not help the DPJ by using leaks to the press to insinuate that DPJ leaders were weak and anti-American, by snubbing then–prime minister Yukio Hatoyama during a visit to Washington, and by publicly refusing to consider any compromise on Okinawa. Now, with new prime minister Naoto Kan taking over for Hatoyama, there is a chance for the relationship to improve. At the recent G20 summit, Kan tried to patch things up, grabbing a seat next to Obama at a luncheon and holding a bilateral meeting with the president that was widely viewed as a success, though the Kan-Obama relationship is so young that they have not made any serious policy progress yet.

Of course, the White House has invested time and blood in Pakistan and Afghanistan, and notched a few other recent triumphs in Asia, such as rebuilding a rocky relationship with Malaysia. Obama has appointed a highly skilled team of Asia advisers, and one of them, Assistant Secretary of State Kurt Campbell, has nimbly negotiated the political chaos in Thailand, maintaining close ties with the government of Abhisit Vejjajiva while not alienating the leaders of the red-shirt protests in Bangkok. This policy makes sense, since the red shirts’ preferred political party might eventually be running the Thai government.

But there is still much room for growth in America’s relationship with Asia. As the global economic crisis has strengthened China’s hand, Beijing has begun to challenge America’s military projection, claim larger swaths of ocean, and increase its soft power through growing disbursements of aid money. By alienating potential friends—the resentment felt in the DPJ, for example, may well endure—Washington only nudges these countries closer to Beijing. As DPJ lawmaker Kuniko Tanoika said during a visit to Washington in May, “the very stubborn attitude of no compromise of the U.S. government … is clearly pushing Japan away, toward China.” What’s more, while America stands aloof, Asia is building its own networks and institutions, which one day might exclude the United States. Besides the intra-Asian trade deals, Asian states are creating new security institutions with ASEAN as the core. In a new book titled Asia Alone, Singaporean analyst Simon Tay argues that ASEAN is increasingly becoming a regional power in its own right, forcing larger players like the U.S. and China to act more multilaterally.

Along with his courting at the G20 summit, Obama has already promised—again—to make a visit to Indonesia, this time during a planned Asia swing in November. But with numerous nations on that itinerary, the Indonesia visit could once again get cut. Don’t expect any new statues of Obama to be erected in Jakarta soon.

Kurlantzick is fellow for southeast Asia at the Council on Foreign Relations.