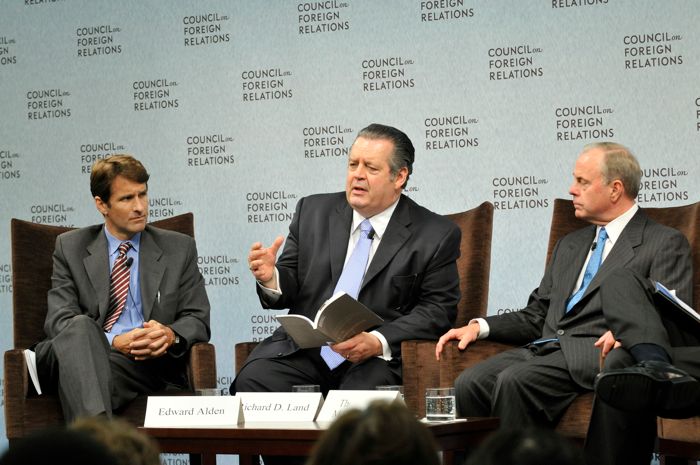 "The stakes are too high to fail," says the report. "If the United States continues to mishandle its immigration policy, it will damage one of the vital underpinnings of American prosperity and security, and could condemn the country to a long, slow decline in its status in the world." For this reason, the report urges: "The United States needs a fundamental overhaul of its immigration laws."

U.S. Immigration Policy contends that America has reaped tremendous benefits from opening its doors to immigrants, as well as to students, skilled employees and others who may only live in the country for shorter periods of time. But it warns that “the continued inability of the United States to develop and enforce a workable system of immigration laws threatens to undermine these achievements."

Reforms the legal immigration system so that it operates more efficiently, responds more accurately to labor market needs, and enhances U.S. competitiveness;
Restores the integrity of immigration laws through an enforcement regime that strongly discourages employers and employees from operating outside that legal system, secures America’s borders, and levies significant penalties against those who violate the rules;
Offers a fair, humane, and orderly way to allow many of the roughly twelve million migrants currently living illegally in the United States to earn the right to remain legally.
According to the report, the high level of illegal immigration in the country is increasingly damaging to U.S. national interests—"[it] diminishes respect for the law, creates potential security risks, weakens labor rights, strains U.S. relations with its Mexican neighbor, and unfairly burdens public education and social services in many states."


But it contends that "no enforcement effort will succeed properly unless the legal channels for coming to the United States can be made to work better." Therefore, "the U.S. government must invest in creating a working immigration system that alleviates long and counterproductive backlogs and delays, and ensures that whatever laws are enacted by Congress are enforced thoroughly and effectively."

The Task Force lays out a series of concrete, realistic recommendations for legislation and administrative reforms that would be part of an immigration policy that better serves America’s national interests:

-Attracting skilled immigrants: The United States must tackle head-on the growing competition for skilled immigrants from other countries, and make the goal of attracting such immigrants a central component of its immigration policy. The report urges an end to the hard caps on employment-based immigrant visas and skilled work visas in favor of a more flexible system, the elimination of strict nationality quotas, and new opportunities for foreign students earning advanced degrees to remain in the United States after they graduate.

-National security: The Task Force calls for minimizing visa restrictions that impede scientific collaboration, noting that America’s long-term security depends on maintaining its place as a world leader in science and technology. The administration should also permit a broader effort by the U.S. military to recruit recent immigrants who are not yet citizens or green card holders, so as to bolster U.S. military capabilities.

-Employer enforcement: The Task Force supports a mandatory system for verifying those who are authorized to work in the United States, including a workable and reliable biometric verification system with secure documents. Tougher penalties should be levied against those who refuse to comply. It calls employer enforcement "the single most effective and humane enforcement tool available to discourage illegal migration."

-Simplifying, streamlining, and investing in the immigration system: Congress and the Obama administration should establish a high-level independent commission to make recommendations for simplifying the administration and improving the transparency of U.S. immigration laws. The government must redouble its efforts to reduce backlogs and other unnecessary delays by investing in the personnel and technology necessary for handling visa and immigration applications efficiently.


-Improving America’s image abroad: The administration and Congress should launch a comprehensive review of the current security-related restrictions on travel to the United States, with an eye toward lifting restrictions that do not significantly reduce the risk of terrorists or criminals entering the country.

-Border enforcement: The report favors the full implementation of the Secure Border Initiative to gain greater operational control of the country’s borders. It also calls for the expansion of “smart border” initiatives that use information technologies and targeting tools to help distinguish individuals who may pose a security risk to the United States while facilitating easier entry by the vast majority of legitimate visitors and immigrants.

-State and local enforcement: State and local police forces can and should be used to augment federal immigration enforcement capabilities, as long as this does not interfere with their core mission of maintaining safety and security in the communities they serve.

-Earned legalization: The Task Force favors a policy of earned legalization, not amnesty, for many of the illegal immigrants currently living in the United States. The DREAM Act, reintroduced in the 111th Congress, provides the right model by requiring that young people without status who wish to remain in the United States must attend college or perform military service and demonstrate good moral character in order to earn their eligibility for permanent residence.


Upholding American values: The report identifies three areas that need immediate and serious review—incarceration policies, the severe penalties for minor immigration and criminal violations, and policies on refugees and asylees—and offers steps to address them, including:

Expand the use of alternatives to detention, such as ankle bracelets or monitoring parolees.
Allow greater discretion in implementing some of the penalties that were previously passed by Congress, such as the mandatory three, five, and ten year bars for many returning deportees.
Create an office within the Department of Homeland Security that is responsible for refugee protection, and give greater priority for refugee issues throughout the Department of Homeland Security and in the White House.
The consensus on the bipartisan Task Force around these issues demonstrates that progress on immigration can be achieved. The report concludes that "the United States has the understanding, the capabilities, and the incentives to move forward and create a more intelligent, better functioning immigration system that will serve the country’s interests. It is time to get on with the job."