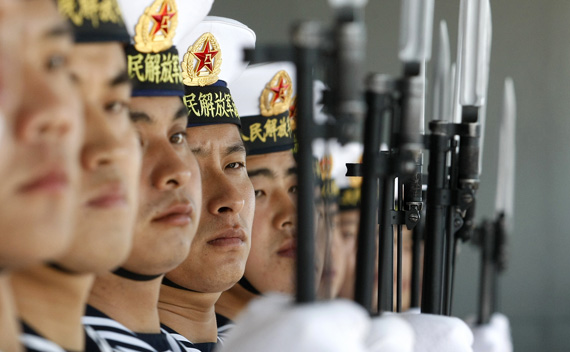 China’s Growing Transparency: Why it’s not all good news

The lack of transparency in Chinese strategic thinking and intentions has long been a bugaboo in U.S.-China relations. U.S. policymakers argue that it is hard to build trust and cooperate without transparency, while the Chinese argue that such transparency only serves the benefit of the stronger power. It is therefore telling that we are now getting a strong dose of transparency from some of China’s leading strategic and political players.

The good news about this new found openness is that the United States no longer has to read the tea leaves to know what the Chinese have in store. The bad news is that we may not like what we hear.

Above all, the message from China is that its global economic reach will soon be matched by a dramatic expansion of its military reach. Rear Admiral Zhang Huachen set the stage back in April of this year, when he stated, “With our naval strategy changing now, we are going from coastal defense to far sea defense. With the expansion of the country’s economic interests, the navy wants to better protect the country’s transportation routes and the safety of our major sea lanes…in order to achieve this, the Chinese Navy needs to develop along the lines of bigger vessels and with more comprehensive capabilities.”

Leading scholar and policy adviser, Wang Jisi, elaborated on this point just a few days ago in an interview in the Japanese newspaper Asahi Shimbun:

“There are communication lines China is concerned about. There are sea lanes not only through the Malacca Straits, but also through the Persian Gulf, the Indian Ocean, the Pacific Ocean and Central Asia. Military forces are needed. We already have sent fleets to fight piracy in Somalia and elsewhere. We also have to protect China’s economic interests and our citizens in many countries…maybe sometime in the future China would use its rapidly deployed forces to rescue Chinese citizens…Many Chinese will say we have peaceful intentions, and the growing of our military power will pose no threat to anyone. This is a sincere statement. But in the real world, we see the security dilemma faced by every country.”

And more transparency concerning Chinese priorities appears likely in the future. The South China Sea—long an area of contention between China and its Southeast Asian neighbors—has reportedly been declared a core issue of national sovereignty on par with Tibet and Taiwan.

Now that we know where the Chinese are going, what we need is for the Chinese and American defense planners to sit down to talk. At the very least, we can avoid conflict as we try to find our way toward cooperation. Thus far, China has not been so interested. Let’s hope that we don’t have to wait as long for China to be confident enough to reopen the military-to-military dialogue, as we did for them simply to tell us what they were planning to do.