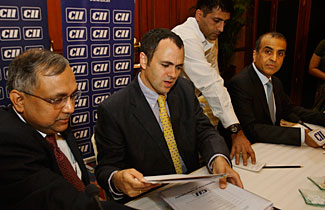 
Leader of Kashmir: new hope for a troubled state?

Omar Abdullah has fresh ideas for Kashmir's revival. But while violence has dropped, protests still roil the Muslim-majority state, where most want to be free of Indian rule.
By Mian Ridge | Correspondent of The Christian Science Monitor
from the June 30, 2009 edition

While those around him drink Kashmiri cardamom tea, he sips a European-style cafetiere of coffee.

Mr. Abdullah is the scion of Kashmir's famous political dynasty. His father, Farooq, served three terms as chief minister; his grandfather, Sheikh Abdullah, was the state's first political leader after independence in 1947. But Abdullah, whose mother is a British nurse, was born and brought up in England.

Since he was sworn into power in January, Abdullah has been described as the great new hope of the troubled state. Young – at 38 the youngest-ever chief minister of Kashmir – and energetic, he is full of ideas for increasing investments and improving infrastructure in a region scarred by 18 years of separatist rebellion against Indian rule.

It will be tough going. Although there has been a huge drop in violence in recent years, most Kashmiris still want to be free of India. Protests, strikes, and agitations regularly interrupt life in the state.

"People expect a lot of him, but with all the distractions and protests and so on it will take time for him to achieve very much," says Morifat Qadri, editor of Afaaq, a daily Urdu-language newspaper. Kashmiris become disillusioned quickly, he adds.

Nonetheless, Abdullah has become chief minister at a hopeful moment. In the state elections that brought his National Conference Party to power in coalition with India's ruling Congress Party, turnout was high, more than 60 percent, despite the usual boycott calls from separatists.

Abdullah and his party believe in greater autonomy for Kashmir and not independence. Analysts see support for him as a vote for improved governance rather than an indication that Kashmiris are beginning to accept Indian rule.

The government in New Delhi – with which Abdullah has strong links – also seems to be in a mood to address the vexed issue of Kashmir, which has caused three wars between India and Pakistan since 1947.

The chief minister says often that he sees a political settlement on Kashmir as a top priority and that the new roads and jobs he promises come second to that. He is also strongly in favor of reducing the number of troops stationed in the state – one of Kashmiris' sorest grievances.

Building a profile unlike his father's

Abdullah came to the nation's attention last year when he made a passionate speech during the parliamentary debate on India's nuclear deal.

"I am a Muslim and an Indian, and I see no distinction between the two," he proclaimed, prompting predictions he would become a spokesman for India's poorly represented Muslim community.

He laughs off the notion of such a role, however, saying that the line was unplanned. His mother is a Christian and his wife a Sikh.

Abdullah, who was educated in Scotland and Mumbai (Bombay), became a member of Parliament at 29 after a short stint working in the private sector. He entered Kashmiri politics in 2002, after the National Congress had lost support under his father. Farooq was fond of castigating Pakistan – he even said India should bomb its neighbor – and was perceived as being far removed from the concerns of the people.

His son is working hard at building a very different profile. This week, Indian newspapers printed pictures of the young politician armed with a bow and arrow during an archery tournament in the Ladakh region of the state, quite unlike the many snapshots taken of his father enjoying a leisurely game of golf.

Tech-savvy: a leader for young people

Like his friend Rahul Gandhi, the heir of India's Gandhi dynasty and general secretary of the Congress party, Abdullah has been cast as a politician for young people, tech-savvy and approachable. He is also keen, he says, to make the authorities in Kashmir more transparent, especially over alleged human rights abuses. In February, when two young men were killed after soldiers fired at a vehicle in the north of the state, Abdullah was quick to order an inquiry into the incident, promising "exemplary punishment." Three soldiers were later punished.

He did less well in May, when the bodies of two young women were found near a security forces base near Srinagar, the capital. Relying on the findings of a forensic report that was later discredited, he said the women had been neither raped nor murdered, triggering weeks of protests.

The protests, however, turned fast into calls for independence, a reminder, should it be needed, of the issue that will dominate Abdullah's time in office.