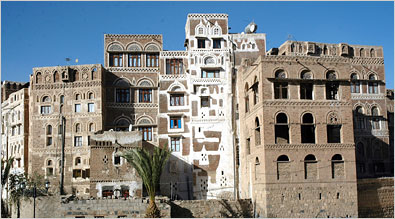 Yemen is a poor, violent, deeply divided country that has been in turmoil since January 2011, when the example of the Tunisian revolution set off mass demonstrations against President Ali Abdullah Saleh. Mr. Saleh, who has been in power since 1978, responded alternately with conciliatory measures, including a promise not to seek reelection, and violent crackdowns.

On March 18, as the protest in the capital swelled to tens of thousands, security forces and government supporters opened fire on demonstrators as they rose from their noon prayers. The crackdown failed to disperse the protest, the largest seen so far in the center of Sana, but at least 40 people were killed and more than 100 injured, dwarfing the level of violence in previous clashes. Mr. Saleh declared a state of emergency shortly after the violence, and denied that security forces had been involved in any shooting.

On March 20, Mr. Saleh fired his cabinet as demonstrations against him grew. On March 21, five army commanders and one of the country's most important tribal leaders threw their support behind the protesters, calling for Mr. Saleh's immediate ouster. A stream of Yemeni officials resigned from the government, including the mayor of the restive southern city of Aden, a provincial governor and at least one of the country’s ambassadors.

Mr. Saleh responded by endorsing a proposal made by a coalition of opposition parties earlier in the month: that by the end of this year he complete preparations to leave office in 2012. But the opposition said it was too late, and that only his immediate resignation would quell the rising street protests.

The United States has urged Mr. Saleh to avoid violence, but has also expressed concern that a power vacuum in Yemen could provide an opening for terrorist groups, including Al Qaeda’s local affiliate, called Al Qaeda in the Arabian Peninsula, which since 2009 has mounted multiple terrorist plots against the United States. His departure could also split the country: a longstanding secessionist movement in the south has joined in protests calling for his ouster.

Home to one of the world's oldest civilizations, Yemen is the poorest country in the Arab world as well as a haven for Islamic jihadists and the site of what amounts to a secret American war against leaders of a branch that Al Qaeda has established there.

Until the protests, the world's attention had mainly been focused on fears that the country could become Al Qaeda's next operational and training hub, rivaling the lawless tribal areas of Pakistan. Yemen’s stability was of increasing concern to the United States, which has provided $250 million in military aid in the past five years. The Obama administration was nurturing enduring ties with Mr. Saleh's government to prod him to combat Al Qaeda. The U.S. military was conducting airstrikes even before the Christmas Day 2009 attempted bombing of a Detroit-bound jet by a 23-year-old Nigerian man who later claimed that Qaeda leaders in Yemen had trained and equipped him.

The delicate position of the United States in dealing with Mr. Saleh now seems as evident in Yemen as it is in Bahrain, where pro-American leaders have cracked down on adversaries on the street clamoring for the monarchy to make way for democratic change.

Diplomatic cables obtained by WikiLeaks and made available to several news organizations offered an intimate view of the wily, irreverent and sometimes erratic Yemeni autocrat. Mr. Saleh has sometimes accommodated and other times rebuffed American requests on counter terrorism.

With its location at the southwestern end of the Arabian Peninsula, the land of ancient Yemen became rich from the spice trade. So rich that the Romans called the land Arabia Felix — Happy Arabia — and Augustus Caesar tried, but failed, to annex it. That prosperity overlapped with the rule of an Islamic caliphate in the 7th century. When the caliphate broke up, Islamic imams exerted control, sowing the seeds of a theocratic political system that would survive for centuries.

When Marxists took over the government of southern Yemen in 1970, many people fled to the north, and a civil war raged for two decades. The conflict became a proxy conflict in the cold war, with the Soviet Union aiding South Yemen, and the United States bolstering the north.

Though north and south were unified as the Republic of Yemen on May 22, 1990, the violence and internecine conflict did not end. The country's extreme topography — with dramatically rugged mountains and remote deserts — helped create impenetrable fortresses for warring tribes, which have long attacked government officials and foreign tourists, as well as one another.

Today Yemen faces a violent separatist movement in the south and an intermittent rebellion in the northwest, though President Saleh has expertly played Yemen's various tribes and factions against one another for decades. When one of the country's most prominent tribal sheiks, Hussein al-Ahmar, resigned from the ruling party, it was a deeply troubling sign for the regime.

Much of the violent tribal feuds, banditry and kidnapping in Yemen appear beyond the control of the central government. Yemen has the region's largest arms market: the country, with roughly 20 million people, is said to have at least 20 million guns.

Yemen did not become a special concern for the United States until 2000, when Qaeda operatives blasted a hole in the American destroyer Cole, killing 17 sailors. After the terrorist attacks of Sept. 11, Yemen joined in a counterterrorism partnership with the United States, and its American-trained forces had some successes in fighting jihadists, even as terrorist attacks on foreign targets continued sporadically.

The jihadists claiming allegiance to Al Qaeda appear to have reorganized and become more methodical, releasing more propaganda materials on the Internet and carrying out more attacks. In July 2007, suicide bombers killed seven Spanish tourists in eastern Yemen, and there were two unsuccessful attacks on oil installations. In September 2008, 10 people were killed (none of them Americans) when two car bombs were detonated outside the American embassy in Sana, the capital.

Anwar al-Awlaki, the American-born cleric now hiding in Yemen, is perhaps the most sophisticated ideological opponent the United States has faced since 2001. Several former Guant&aacute;namo detainees fled in 2009 to Yemen from Saudi Arabia and pledged to mount attacks on Saudi Arabia and other countries from their Yemeni redoubt.

Despite the American airstrike campaign, the leadership of Al Qaeda in the Arabian Peninsula survives, and there is little sign the group is much weaker. Attacks by Qaeda militants in Yemen have conducted several deadly assaults on Yemeni army convoys. Al Qaeda's Yemen branch regularly puts out its first English-language online magazine, Inspire, complete with bomb-making instructions.

Whether or not Mr. Saleh is forced from power, the political crisis in Yemen will likely remain acute, not only because of its tribal culture and topography, but also because of its deep poverty, high illiteracy and birth rates, and deeply entrenched government corruption. Its economy is precariously tied to oil resources, which are declining rapidly.

The governing elite mainly comes from the Sunni majority, which makes up 55 percent of the population and is concentrated in the more developed coastal regions of the south and southwest. A Shiite movement, based in the mountainous north, declared independence and its intermittent rebellion has left thousands of people dead since it began in 2004.

The government is also deeply unpopular in the remote provinces where Al Qaeda militants have sought sanctuary. The tribes there tend to regularly switch sides, making it difficult to depend on them for information about Al Qaeda. "My state is anyone who fills my pocket with money," goes one old tribal motto.

The current democracy protesters may mark a change from that mindset.  During February's protests in Taiz, long been a bastion of opposition sentiment, a local cleric preached to the crowds of men and women sitting on the pavement.