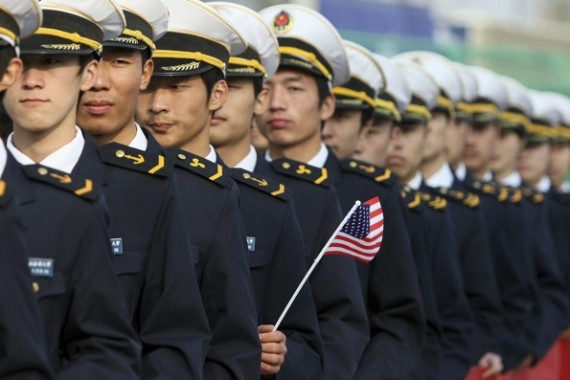 China’s Rise and the Contested Commons

by Evan A. Feigenbaum

Is there a more interesting place these days than the South China Sea? It’s the locus of a full-contact diplomatic spat between Washington and Beijing. It’s an arena for some nasty finger-pointing between Beijing and Hanoi. It’s an issue that may well destabilize relations between Beijing and Jakarta. And it’s the issue that somehow managed to make Asia’s most lethargic regional organization—the ASEAN Regional Forum—a bit more interesting at last month’s ministerial in Hanoi.

But here’s something else that strikes me about the South China Sea: It’s going to be an arena that tests some important assumptions about China’s rise.

For one thing, how will China deal with issues that involve its sovereignty claims but that also touch public goods and issues of the commons?

I’ve been struck in recent weeks by just how much the United States and China are talking past each other—one keeps talking about sovereign rights and claims, while the other talks almost entirely about international rights and customs. So, quite apart from Beijing’s sovereignty claims to the sea, how China speaks and acts with respect to these issues—rights of passage, freedom of navigation, interpretations of customary international law—will deeply affect perceptions of its exercise of power.

Second, Beijing has railed at the United States for “internationalizing” the issues in the sea. But rights of passage and freedom of navigation are not bilateral issues. They touch the rights and interests even of non-claimants. That’s one reason so many non-claimants to formations in the sea spoke up at the Hanoi ministerial, including Singapore, Japan, and Australia. Indeed, if the issues at stake are purely bilateral, then Beijing is, in effect, denying the relevance of issues of the commons. And many in East Asia, not just the United States, will surely beg to differ.

Third, then, Beijing’s choices about the sea will affect perceptions of how a rising China plans to deal with the much broader question of public goods. Put a bit differently, if China is a “stakeholder” in the international system, then what does its approach to the South China Sea tell us about how it will exercise that stake?

Ironically, Beijing has derived considerable benefit from the U.S. provision of sea-lane security in and beyond Asian waters. That’s ironic because China is, as we all know, so deeply unhappy with U.S. activities in the international waters off its coasts. And Beijing especially despises U.S. maritime and air surveillance.

But for all the Chinese grumbling about American “hegemony” (for a prime example, check out this stemwinder from yesterday’s People’s Daily by the ever-confrontational Major General Luo Yuan), how many countries have fared better from American primacy than has China?

Some in China’s strategic class argue that Beijing chafes under the present international system. (And what major power doesn’t wish to shape and adapt the rules of the system to its own advantage?  China is certainly no exception in this regard).  But, over the last thirty years—in an era of relative U.S. primacy—China has wracked up achievements unprecedented in economic history, reemerged as a major power, and joined nearly every top table of international relations. And China has done so while taking a conspicuous free-ride on the American provision of public goods, not least provision of security in international waters. In short, who has fared better in recent decades than China?

If Chinese strategists now wish to alter, or even end, U.S. practices, is Beijing prepared to assume the burdens of the commons itself? And, if so, does it propose to do so in partnership with the United States and others—or alone?

The United States isn’t going anywhere in Asia, not least on issues of navigation and maritime passage. But the Chinese debate about this question will say much about a rising China. After all, we know that sovereignty trumps most other considerations in Chinese foreign policy. But a stakeholder in the international order can’t simply divorce its sovereign claims from the public goods and common resources affected by those claims.


This entry was posted on Friday, August 13th, 2010 at 4:59 pm and is filed under Asean, China, Global Order, South China Sea, Southeast Asia, U.S. Foreign Policy, U.S.-China Relations, Vietnam. You can follow any responses to this entry through the RSS 2.0 feed. You can leave a response, or trackback from your own site.

4 Responses to “China’s Rise and the Contested Commons”

I am not surprised by the view of the author, someone with a State Department background. It’s just like an article by a former Chinese foreign ministry official.
The matter of fact is that things such as joint US-Vietnam military drill is truly not intended at finding a solution but creating tension. The US has been playing cards to undermine China.
I bet one day when Chinese or Russian hold naval drills off the coast of New York or California in the name of keeping peace, the Americans will start to understand the kind of feeling.
It’s better to leave to the countries in that region to solve the problems themselves. China has been doing a lot to build good neighborliness because it serves its core interest. American’s participation will only make things worse.
Look at the chaos the US created in Iraq.

August 14, 2010 at 11:04 am AT Nguyen responds:
What the commentator RousseauC calls as drill is in fact nothing more than non-combatant exercises.And this kind of exchange is not the first time event between US and Vietnam. Vietnam strives for multilateral relations. So these joint naval exercise should not surprise anyone, much less creating tension. That kind of tension comes from China with its naval drills in the sea at South China using real munition some weeks ago. Though it was the biggest drill ever hold in SCS China did not inform its neighbors nor invite any observer. I agree that South China Sea is a serious test for the Chinese to prove their peaceful rise. Common spaces should stay that way. Exclusive Economic Zones should be determined by land border and not by some isolated inhabited rocks/islands. As long China is unwilling to accept these international laws there is doubt that it
is a responsible stakeholder in international issues. A multilateral approach is here more appropriate than anything else and is accepted by many.

August 15, 2010 at 8:05 pm Hiep Nguyen responds:
If China wanted to be respected by its neighbours and indeed the world then it should rein in North Korea after sinking the South Korean naval vessel and not conducting military exercise and gunboat policy in the South China sea. China made a huge strategic blunder and now everyone welcome the US to counterbalance a valueless and theatening power determining to benefit itself at the expenses of others, not unlike the Prussian rise in Europe causing war and misery to the world. Its value (if it has any)is not universal. Its economic might and power causes fear but not respect.

August 16, 2010 at 11:59 am DL responds:
Sorry to burst your bubble RousseauC, but it’s already been happening since the Cold War and the US doesn’t cause a stink about it. Why? They’ve been in international waters which is entirely legal and as the author pointed out, the US is concerned with the international “commons”, which contrasts with what appears to be China’s goals.
http://news.bbc.co.uk/2/hi/americas/7628899.stm