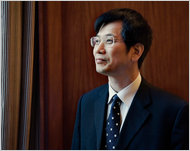 “In any nation, when people are demanding reform, this is a sign of prosperity. To ignore these demands is to invite instability.”

Yu Keping
ADVOCATING democracy in a single-party, authoritarian state would seem to be a fool’s errand.

Wei Jingsheng, one of China’s most ardent pro-democracy dissidents, spent over a decade in jail for demanding multiparty elections. Last year, the writer Liu Xiaobo was given an 11-year sentence after he wrote a manifesto calling for an end to the Chinese Communist Party’s hold on power.

Then there is Yu Keping, a mild-mannered policy wonk who has been singing the praises of democracy for years. In his most famous essay, “Democracy Is a Good Thing,” he made an impassioned argument for the inevitability of direct elections in China, describing democracy as “the best political system for humankind.”

In April, he published another treatise calling on the Communist Party to abide by the Constitution, not a small matter in a country where government leaders often argue that the law should be subservient to the party.

Mr. Yu’s writings are sold in state-owned bookstores, and he is a ranking Communist Party official in charge of the Central Compilation and Translation Bureau, an obscure agency dedicated to translating works by Chinese leaders and Marxist tracts from around the world. He also runs a policy research organization, China Center for Comparative Politics and Economics, that provides advice to China’s leadership.

Even China experts have a hard time determining whether Mr. Yu is a brave voice for change or simply a well-placed shill.

Mr. Yu, 51, a deceptively soft-spoken man who is fond of guns and off-road driving, does little to clarify his role. “I am only a scholar interested in academic research,” he said with a grin, surrounded by hundreds of books in his Beijing office.

A closer look at Mr. Yu provides a small window into the role of those few public intellectuals who have learned to navigate what would appear to be treacherous terrain. They tackle seemingly provocative subjects and can even function as a force for change, but in the end their writings rarely challenge the underpinnings of China’s single-party, authoritarian rule.

Even Mr. Yu’s use of the word “democracy” is not what it seems. China’s leaders frequently talk about it as a worthy goal, but in practice they have virtually no intention of ceding the Communist Party’s monopoly. In fact, Mr. Yu never advocates Western-style multiparty democracy.

“What he writes might sound good, but he is misleading the Chinese people into thinking the government is moving toward democracy,” said Guo Tianguo, a former rights lawyer from Shanghai who was forced into exile five years ago and now lives in Canada. “He owes his job to President Hu Jintao, and if he ever pushed too hard he would lose everything. He’s a coward.”

YET to some who have followed his career, Mr. Yu’s role is far more nuanced. They say that he is a true believer in democracy, but that he walks a tightrope, trying to nudge China’s political elite toward reform without upsetting the apple cart.

Minxin Pei, a specialist in Chinese politics at Claremont McKenna College, said that Mr. Yu is a uniquely Chinese public figure who tries to influence the system through carefully choreographed words and well-placed obfuscation. “He’s flexible in the sense that if the atmosphere were more tolerant, he’d go further,” he said. “But he knows that going too far won’t do any good for him or the larger cause he’s promoting.”

During a series of recent interviews, Mr. Yu was relaxed and loquacious, but his responses hewed closely to his writings, which call for the incremental introduction of democracy “when conditions are right.” But he also stepped beyond the vague pronouncements on democracy that have been uttered by Mr. Hu, who has suggested that China already enjoys widespread political liberties.

Asked whether he thought the Chinese political system could be described as democratic, Mr. Yu offered up a few examples of reforms that have been tried in rural townships or small provincial cities but then added, “We have a long way to go.”

Like many of his peers, Mr. Yu grew up in the tumult of Mao’s Cultural Revolution, the decade between 1966 and 1976 when concepts like universal rights and free speech were viewed as bourgeois contaminants from the West. Class struggle was the watchword of the day, and Mr. Yu, the son of rice farmers from coastal Zhejiang Province, was anointed the leader of his school’s Red Guard battalion. He was not quite 10 years old.

He recalled terrorizing landlords and merchants during so-called struggle sessions, a wooden revolver tucked into his pants. “I was so small I had to stand on a chair,” he said.

In 1978, two years after the death of Mao, during the gradual return to normalcy and the reopening of schools, he was one of the first of his generation to go to college. “I literally crawled out of the paddies to take the entrance exam,” he said, smiling and shaking his head at the memory.

Mr. Yu was a teacher at Peking University during the spring of 1989, and he said he went to Tiananmen Square several times to look after his students, who were part of the throngs protesting corruption and inflation and demanding democratic reforms. “I was so worried about them,” he said, recalling the denouement — a bloody military crackdown in which hundreds died — as “a regrettable tragedy.”

But he said those events taught him that China must have legal avenues for its citizens to express their disdain for injustice, or their desire for change. “In any nation, when people are demanding reform, this is a sign of prosperity,” he said. “To ignore these demands is to invite instability.”

Mr. Yu said he was impressed by the United States, where he was a visiting scholar at Duke University. He relishes memories of the intellectual give-and-take in the classroom and the unencumbered vigor of the news media. “I really loved the American can-do spirit, the values of equality and justice, and the way people cared about the environment,” he said. For all the open-mindedness of Americans, he still winces when he recalls the barbed reactions of people when they learned he was a member of the Communist Party.

HIS most indelible experiences came after he left Duke to travel across 30 states on a Greyhound bus. He said he saw the chasm between the grotesquely rich and the abjectly poor, the lack of respect for the elderly, and the apathy on Election Day, especially among the “common people” who would seem to be the most invested in political change.

Mr. Yu also had a personal brush with a downside of abundant liberty. He said he was mugged twice, once by a man who put a knife to his back in a public restroom in Indianapolis. “I pretended I didn’t speak English; someone else came into the bathroom and the man ran away,” he said with a laugh.

That experience set off his interest in guns, and Mr. Yu sometimes lets off steam at a shooting range in Beijing. His other distraction from the esoteric is off-road driving. “She’s terrified of my driving,” he said of his wife, Xu Xiuli, a professor of Chinese economic history.

Before ending the interview, he had one parting thought. The story about his childhood, he said, contained a lesson, and it came back to his passion. “When I think about those days of the Cultural Revolution it reminds me of one truth,” he said. “It is only democracy and the rule of law that can save China from ever again falling into that kind of fate.”